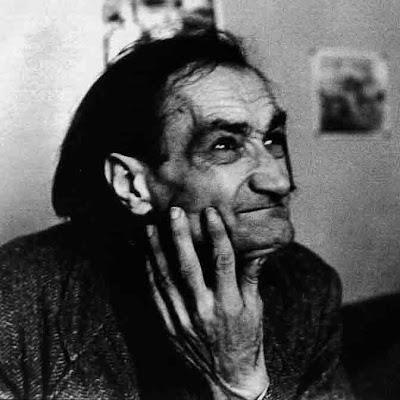 We have never written anything except against a backdrop of theincarnation of the soul, but the soul already is made (and not by ourselves when we enter into ppetry.The poet, who writes, addresses himself to the Word, and the Word to its laws. It is the uncoscious of the poet to believe automatically in these laws. He believes himself free thereby, but he is not. There is something back of his head and over the ears of his thought. Something budding in the nape of his neck, rooted there from even before his beginning. He is the son of his works, perhaps, but his works are not of him; for whatever is of himself in his poetry has not been expressed by him but rather by that unconscious producer of life, who has pointed life out to him in order that he not designate life himself; and who obviously has never been well-disposed toward him. Well, I don't want to be the poet of my poet, of that self which fancied it'd choose me to be a poet; but rather a poet-creator, in rebellion against the ego and the self. And I call to mind the old rebellion against the ego and the self. And I call to mind the old rebellion against the forms that came over me.It is by revolt against the ego and the self that I disemburden myself from all the evil incarnations of the Word, which have never been anything more for man than a compromise between cowardice and illusion, Aad I only know abject fornication when it comes to cowardice and illusion. And I don't want a word of mine coming from I don't know what astral libido completely aware of the formations of, say, a desire that is mine and mine alone. There is in the forms of the human Word I don't know what operation of rapaciousness, what self-devouring greed going on; whereby the poet, binding himself to the object, sees himself eaten by it. That is a crime weighing heavy on the idea of the Word-made -flesh, but the real crime is in having allowed the idea in the first place. Libido is animal thought, and it was these same animals which one day were changed into men. The word produced through these men is the idea of an invert buried by his animal response to things, who has forgotten ( through the martyrdom of time and things) that the word has been invented. The invert is he who eats his self, and desires that his self nourish him, seeking his mother in it and wanting to possess her for himself. The primitive crime of incest is the enemy of poetry and the killer of poetry's immaclacy. I don't want to eat my poem but I want to give my heart to my poem. And what is my heat yo my poem? My heart is what isn't my ego. I am that forgotten poet who one day saw himself hurtle to matter, and matter never will devour me, my ego. I don't want those old reflexes, results of an ancient incest come from an animal ignorance of the Virgin law of life. The ego and the self are those catastrophic states of being in which the Living Man allows himself to be imprisoned by the forms that he percieved by himself. To love his ego is to love death, and the law of the Virgin is infinite. The unconscious producer of our selves is that of an ancient copulator who frees himself to committ more vulgar magicks, and who has pulled off the most famous wizardry by having brought himself back to his self-same self over and above his very self, eternally, so that he was able even to pull a word out of a cadaver. The libido is the definition of that cadaverous desire, and the falling man an invert criminal. I am such a primitive, discontented with the inexiable horror of things. I don't want to reproduce myself in things but I want things to happen through my self. I don't want to reproduce myself in things but I want things to happen through my self. I don't want an idea of my ego in my poem and I don't want to meet my self again there, either. My heart is that eternal Rose come from the magic power of the initial Cross. He who crucified Himself never returned to himself. Never. For he also surrendered to Life the self by which he sacrificed Himself, after having forced it within himself to become the being of his own life. I want only to be such a poet forever, who sacrificed himself in the Kabbala of self for the immaculate conception of things.

The little clestial poet
Opens the shutters of his heart.
The heavens clash. Oblivion
Uproots the symphony.

Stableman the wild house
That has you guard wolves
Does not suspect thewraths
Smouldering beneath the big alcove
Of the vaults that hang above us.

Hence silence and darkness
Muzzle all impurity
The sky strides forward
At the crossroad of sounds.

The star is eating. The oblique sky
Is opening its flight toward the heights
Night sweeps away the scraps
Of the meal that contented us.

On earth walks a slug
Which is greeted by ten thousand white hands
A slug is crawling
There where the earth vanished.

Angels whom no obscenity summons
Were homeward bound in peace
When rose the real voice
Of the spirit that called them.

The sun lowe than the daylight
Volatilized all the sea
A strange but clear dream
Was born on the clean earth.

The lost little poet
Leaves his heavenly post
With an unearthly idea
Pressed upon his hairy heart.

Two traditions met.
But our padlocked thoughts
Lacked the place required,
Experiment to be tried again. 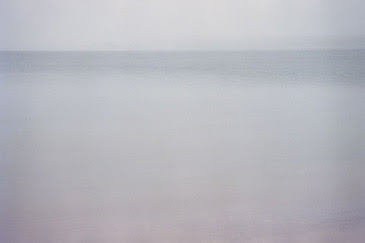 Looking to deep
find we forget
what lies on the surface,
reasons to be alive
instead of half dead.
Yesterday I refused
heroin tears
as Noel Edmonds
was blasting
loudly
from the T.V.
The record needle
revolved around
like death
nobody listened,
nobody cared,
until the 10p box was declared.
I see old friends,
putting holes in their skins,
these are the people
that new crusades don't win,
yesterdays divisions
now over the price of a tin.
Outside the sun was shining
but democracies village had gone
and a system that fails them
was getting away with murder
but there in happy mount
injection alley
they had erected a fence
around their own milltir sqwar
each to his own I guess.
Posted by teifidancer at 14:27 0 comments 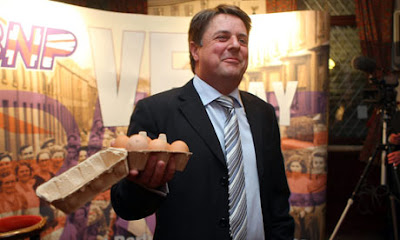 detached
a little cold
listening to dambusters
on continuous loop.
Thinking of aryan boys
and the Queen
shines his eye
in transparency.
Reflection of his image
is very blurred
he wants to break free
feed the ignorant.
The shit flows
as he celebrates non diversity
switches off the lights
but darkness already in full possession.
Posted by teifidancer at 13:58 0 comments 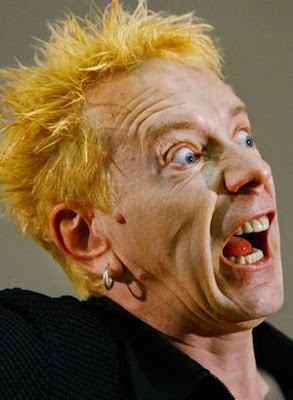 From Penyberth to Parc Aberporth: Welcome to warmongering Wales.

Here is an excellent lecture on the militarisation of Wales in which an articulate voice from the Welsh media speaks out against the whole military industrial complex.
In which Angharad Mair condemns the use of West Wales for the development and testing of Unmanned Aerial Vehicles, UAVs. An issue very much close to my heart.
Sadly I have not seen much coverage of this issue from other outlets of the Welsh media itself.
I wonder why.
You can read the lecture here.

George MacBeth - To the small creatures of the dark. 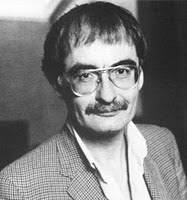 Out of the dark
into the red moon-light of the corridor,

out of the dark
into the artificial day of your cages,

out of the dark
howling,

out of the dark
for the sake of new food,

in your mottled skin,
gathering hair, wool, and scales,

wings pleated,
or at ease in a straw nest,

so many of you,
believers in what the light will do,

and fearing it,
all fall, creep, run and prey,

all rise, flap, sing,
all cry to teach me,

I beseech you,
out of the dark,

into the dark
of another day,

all come,
all bow down,

all pray for me.
Posted by teifidancer at 12:19 0 comments 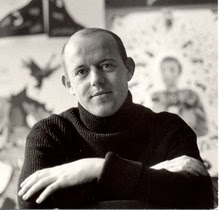 Polish poster legend friend of the great Alejandro Jodorsky member of Parisian surrealist collective PANIC.He had a huge influence on European design when he moved to Paris in the 1960's, his work becomming very influential on the artists and designers that took part in the Ateliers Populaire in May 1968 and especially on those that would go on to form the political design firm Grapus.
A  retrospective of his work now showing at Royal College of Art, S47 and it's all free, the showing that is, and i'll be fortunately in the vicinity, so will have to take a little look.
It's from 16th July to 6th of August 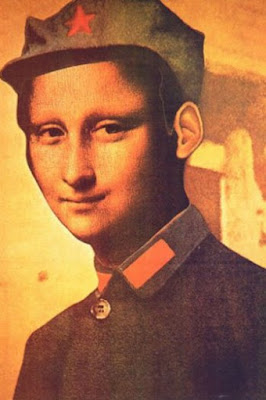 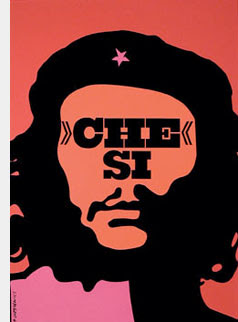 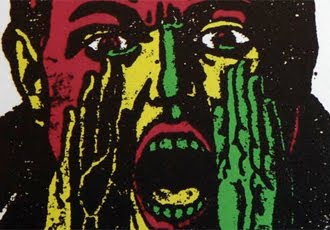 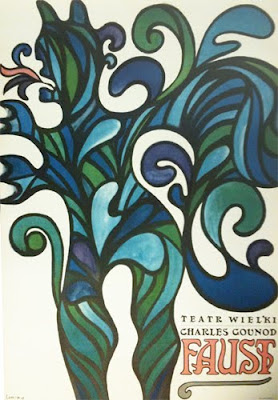 Posted by teifidancer at 12:02 4 comments 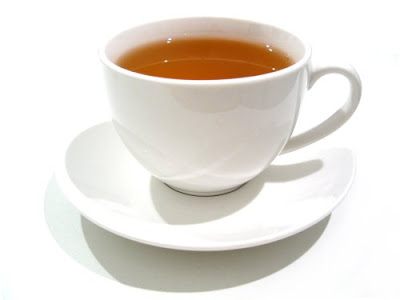 Nine to five
reflections
treading through
explanations
that do not
want to play
eclipse is due
apologies
come slipping
through sun and moon.
Sometimes
a tall tale
an ugly murmour
gathers
inconspicuous
functionality
seduced by distant violins
as sands of time
stretch out
arrangements.
Cherry lips
reconnect
bring us water
wash away our tears
all gods are equal
especially mine
illusions of nurture
and the long distant plan
am working at the femininine instinct
lights flick on again, bring me cold tea and sympathy.
Posted by teifidancer at 14:58 0 comments

THE LOGIC OF FIRE - Vernon Edgar 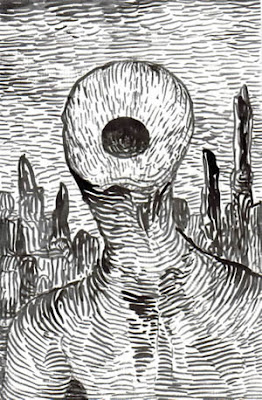 Picture :-
the logic of war, by William T. Ayton

The logic of fire is divided to the no nonsense of corpo- reality. Atomicity's sublimiyity broke, rudely awoke in excruciating compromise of humanoid form. Cyclotronic dees drived dichotomic percussion. Bombarded, we awoke, broke through and through our pierced side of Christ_Adam bomb-blown stilted mentalities. Meta-terran trippers trapped in science fiction jails, mystics run amucked up botched hockshop pitch batch shits gunk stuck, stainin' to filter out great moontide's flash flood of bad scenarios, the para-news deletions, unholy Hal-Lucy machinations of poor-toned think tank, a roller coaster green, hourglass-assed spider omegas, automated camp with globe-wide showers, blasted planet's bitter-bitten escapist exhaust, robotomized bludgeonists in the last metal horror, the fate of the Third Men, and according to John, attack of the interstellar locusts, snares and snags of snarls and sundry elect lookin' for the iceberg in their lakes of fire, private eye spying private eye in public dark of alien nation. 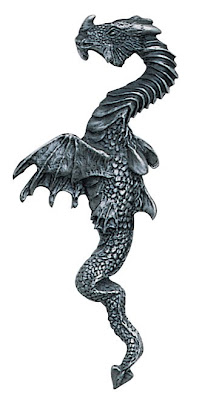 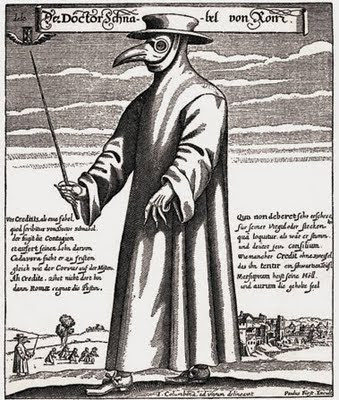 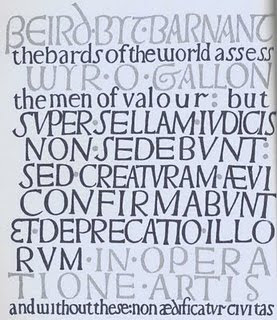 THIS HAS BEEN ADAPTED FROM A PAPER READ BY
Glyn Penrhyn Jones
to the 9th British Congress on the history of Medicine
at Swansea on 7th September, 1973.
He suffered an untimely death shortly afterwards.
Posted by teifidancer at 16:50 2 comments 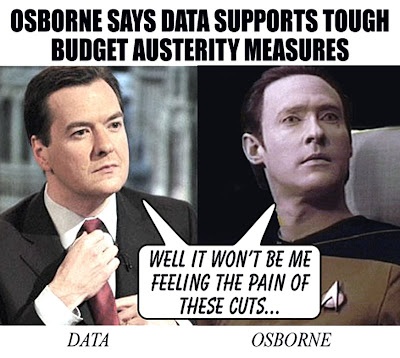 Posted by teifidancer at 14:04 0 comments