Gil Scott- Heron - Ladies and Gentlemen the Godfather of Rap is Back! 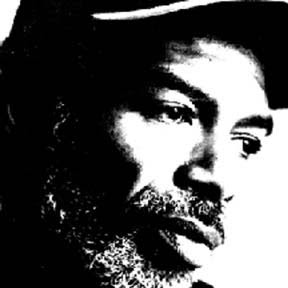 Gil Scott-Heron is back, next week sees the release of his long awaited new album,
" I'm new here " on independent label XL recordings. Already being cited as a possible contender for record of the year, on all accounts it's going to be a blinder. His first record for thirteen years, I feel it will have been worth the wait.
This legendary poet and political activist had been charting the injustices and cruelty of American society for years, raging against its apparent hypocricy, the irony being, it was this very same system that turned on him, culminating in jail sentences and stretches due to simply being in the wrong place at the wrong time, found with too much gear in his pockets, labelled and spat out. Sure he had problems, but when this man needed help, what did they do? They locked him up, that was really going to cure him, no I don't think so, just another sad reflection of a cold stinkin' rotten system.
Anyway in my opinion a brave, charismatic figure, he was seen as a precursor to many of hip hop and rap. The Godfather.
I was lucky to be able to see him perform on a number of occassions in the late nineteen eighties, once at Glastonbury, can't remember the correct year, perhaps someone could remind me, and 3 times more in London at C.N.D and anti apartheid rallies one I think in Hyde Park? My memory has got pretty obliterated over the years.
He never stood on fences, his language and honesty apparent to all who witnessed him. Apparently the era I saw him perform, his talent was on the wain, but I did not notice, I did not care, all I remember was a powerful, incendiary, sweet , soulful, smoky voice , gently rallying us against the cruelty of the world. He became a bit of a hero to me, so it was sad not to have him around for a while, but the thing is, for some of us he never did go away. His songs of freedom lifting us through our sombre histories, stirring and always inspiring.His sad songs and his melancohly somehow reaching and getting through.
Well lets hope this time around he finally confronts some of his demons, and gets the success he really deserves as a truly original lyrical genius. In the meantime I thought I'd quickly post some of my favourite verses by this mercurial figure. Let his gritty words of truth sing out. Peace brothers and sisters our time is now

Picture a man of nearly thirty
who seems twice as old with clothes torn and
dirty.
Give him a job shining shoes
or cleaning out toilets with bus station crews.
Give him six children with nothing to eat.
Expose them to life on a ghetto sreet.
Tie an old rag around his wifes's head and
have her pregnant and lying in bed.
Stuff them all in a Harlem House.
Then tell them how bad things are down South.

Speed on by. Don't seem to have the time.
What about this life, what about this life
Can I call mine?
Issues in the paper, But somehow i'm not concerned.
Seems I've been this way before, but I never learn.
Children slowly turn.

Time sped gone. We didn't see it go.
Now what do we have, now what do we have
That we can show?
Friends you swore you'd never lose melted from your style
Down the tunnels of your youth and now you never smile.
Children learn to smile.

The world spins around us
we search for a balance
The secrets lie in darkness and light
Our lives are like treasures
Unveiled as perfection
A gift to us from spirits on high
Equator. Divider. Equate us. Combine us.
To seek the answers beyond our sight...

I THINK I'LL CALL IT MORNING

BEGINNINGS ( The First Minute of a New Day )

We're sliding through completly new
beginnings.
Ww're searching out our every doubt
and winning.
We want to be free
and yet we have no idea
why we are struggling here
faced with our every fear
just to survive.

We've heard the sound and come around
to listening.
We've touched the vibes time after time
insisting that we know what life means;
still we can't break away
from dues we've got to pay
we hope will somehow say
that we're alive

"The economy's in an uproar,
the whole damn country's in the red,
taxi fares is goin' up... What?
You say Billy Green is dead?"
"The government can't decide on busin'
Or at least that's what they said.
Yeah, I heard when you tol' me,
You said Billy Green is dead."
"But let me tell you 'bout these hotpants
that this big-legged sista wore
when I partied with the frat boys.
You say Billy took an overdose?"
"Well now, junkies will be junkies,
But did you see Gunsmoke las' night?
Man they had themselves a shootout
an' folks wuz dyin' left and right!
At the end when Matt was cornered
I had damn near give up hope...
Why did you keep on interruptin' me?
You say my son is takin' dope?
Call a lawyer! Call a doctor!
What you mean I shouldn't scream?
My only son is on narcotics,
should I stand here like I'm pleased?"
Is that familiar anybody?
Check out what's inside your head,
because it never seems to matter
when it's Billy Green who's dead.

WHEN YOUR GIRLFRIEND HAS A BETTER FRIEND

Let me give you something straight up my friend
Your whole life can turn super funky
And put a too large foot in your rear end
if you're digging a dame who's a junky.

I'm sure I don't need to take you back down the road
And retell all the details about smack
But I believe me it's still out there breaking the codes
And its ten times worse than cheeba or crack.

And "Fuck! How in the world did we come to be friendly?"
And all them other bullshit cliches
And you don't know what you'da done if you'da been me
Just be glad that there wasn't no fuckin way.

Okay then, just for a minute let's both speculate
And since you would be me, I would be you
So now as you (I) can get puffed up and be fuckin great
About what I (meaning you) should or shouldn't do.

I can hear it all nw knowing just what you'd say
About not hangin' out in the streets
And immediately we know there aint no f'n way
'Cause if it wasm.t no hangin' out it wasn't me.
This is gonna sound weak and it ain't no excuse
But it's been years since I'd been around scag
And acting sel-righteous is the quickest way to lose
And to tell you the truth it's a drag

Remembering the shivers and quivers and shakes
Starts to bring the butterflies back to your gut
But junkies don't care what you think are mistakes
She says "Are you givin' up the money or what?"

Or end up in an alley trying to turn a quick trick
Pushers don't care how the money is made
And when the addict starts getting uptight for a fix
They say "Fuck gonorrhea and fuck A.I.D.S!"

In theend it ain't theories or jive-ass philosophy
Or what the papers or politicians think
And nobody needs no more heroin (metadone) sociology
While the speaker pours himself another drink.

So you're right. Congratulations on what was weak about me
I admit I lok like somebody's flunky
But right ain't always the best thing to be
When the girl that you love is a junky.

The world!
Planet Earth; third from the Sun of a gun, 360 degrees.
And as the new worlds emerge
stay alert. Stay aware.
Watch the Eagle! Watch the Bear!
Earthquaking, foundation shaking,
bias breaking, new day making change.
Accumulating, liberating, educating, stimulating change!
Tomorrow was born yesterday.
From insde the rib or people cage
the era of our firdt blood stage was blotted or erased
or TV screened r defaced.
Remember there's a revolution going in in the world.
One blood of the early morning
revolves to the one idea of our tomorrow.
Homeboy, hold on!
Now more than ever all the family must come together.
Ideas of freedom and harmony, great civilizations
yesterday brought today will bring tomorrow.
We must be about
earthquaking, liberating, investigating
and new day making change in
thw world.
Posted by teifidancer at 19:20