Solidarity with the Stansted 15 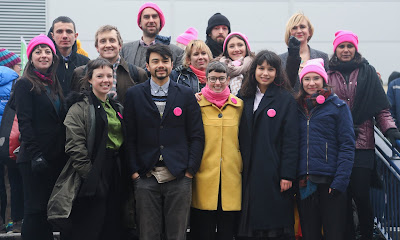 Last year, 15 people took non-violent direct action at Stansted on March 17; 2017 to prevent the deportation of 60 people on a  secretive charter flight bound for Ghana , Nigeria and Sierra Leonne. The Stansted 15 as they have become known  put their bodies on the line to prevent this flight taking off, locking themselves around the aircraft and physically blocking it from taxiing toward the runway, preventing  the flight from leaving, acting out of conscience and out of a concern, as they saw it, that people were at risk of suffering serious human rights violations if deported from Stansted.
They belonged to the groups  End Deportations  https://twitter.com/edeportations , Lesbians and Gays Support the Migrants and Plane Stupid and aimed to show links between climate change, colonialism, homophobia and the border regime.The Stansted 15 expected to face retribution for their protest. and were charged with aggravated trespass, but four months later this was changed to “endangering safety at aerodromes” - a serious terrorism-related charge which can lead to a life sentence.
They never actually expected to be found guilty of terrorism offences.But on Monday, the group became the first activists involved in a non-violent direct action protest to be convicted under laws that were formulated in response to the Locherbie Bombing. After a judge told the jury to disregard evidence put forward to support their defence that their attempt to stop a deportation flight was intended to stop human rights abuses, the defendants must wait until February to learn if they will face custodial sentences.
Deportation charter flights are part of the UK's hostile environment for migrants, which also includes immigration detention centres, raids, signing at the police station and keeping people in a limbo of uncertainty over their future – often for years. People deported on these flights are snatched from their communities and families - without due process and without time to challenge the deportation through legal means. The government’s punitive, racist asylum and deportation policies, aimed at criminalising the very act of migration, have devastating and long-lasting consequences for those seeking refuge. These secretive charter flights are pre-booked and later filled by the Home Office, creating a demand for migrant bodies to be removed irrespective of their current immigration status. The peaceful action of the #Stansted15 saved lives and resulted in 11 people out of the 60 who were on the plane to have been granted legal status in the UK.
We see the impacts of the UK's hostile environment in our communities every day and it is only when people come together to challenge it that we feel the cracks opening in this unjust system. The Stansted 15's action was incredibly important, not only for the people on the 'plane, who were able to continue with their asylum claims but also for what it represented and the ideas and conversations that have come out of it.  As the Windrush scandal has so clearly demonstrated, the Home Office has repeatedly harmed and otherwise callously mistreated many people in this country. It has misused and abused deportation powers against those with rights to British citizenship, against those entitled to asylum, and against those with other good claims to live in the UK. Here, 15 people were doing something they saw as a means to partly redress the balance. Actions designed to defend the rights of a powerless - and sometimes maligned - group.
Around the world, those who seek to defend human rights are currently under sustained pressure. In the Gulf (Saudi Arabia, Bahrain, the UAE) human rights defenders have been virtually silenced. Closer to home, they’re under attack in Turkey, Hungary, France and elsewhere in Europe.
Amnesty International UK, who have supported the group throughout the trial, has launched a solidarity campaign with the 15.Kate Allen, Amnesty International UK’s Director, said: “This is a crushing blow for human rights in the UK.
“The terrorism-related charge against these individuals was always a case of using a sledgehammer to crack a nut.
“It’s deeply disturbing that peaceful protesters who caused disruption but at no time caused harm to anyone, should now be facing a possible lengthy prison sentence.
“This whole case will send a shiver down the spine of anyone who cares about the right to protest in our country.
“Around the world, human rights defenders are coming under increasing attack. The UK should not be bringing such severe charges against those who seek to peacefully stand up for human rights.”
This is a moment for people of a genuinely liberal conscience to take a stand. It is imperative that the Stansted 15 receive maximm solidarity for those who understand that their prosecution is the harbinger of hideous attacks on  what are meant to be open, democratic societies, who on  human rights day were found guilty of an appalling use of terror-related law for stopping a deportation flight and thereby saving lives.https://leftfootforward.org/2018/12/our-action-saved-lives-says-stansted-15-campaigner-found-guilty-on-terror-related-charges/
The Stansted 15 are: Helen Brewer, Lyndsay Burtonshaw, Nathan Clack, Laura Clayson, Mel Evans, Emma Hughes, Joseph McGahan, May McKeith, Ruth Potts, Jyotsna Ram, Nicholas Sigsworth, Benjamin Smoke, Melanie Strickland, Ali Tamlit and Edward Thacker. Apart from two who are 38 and 44, the activists are aged between 27 and 35. They put their bodies on the line to prevent a potential threat to and loss of life, now we have to show we’ll stand with them. They are human rights defenders - the real criminals are the Home Office. We must  and continue to treat refugees and asylum seekers with the respect and dignity they deserve
Today Tuesday 5.30 at the Home Office: Demonstrate in solidarity with #Stansted15. Protest the convictions & demand an end to brutal deportations, immigration detention, and the racist hostile environment (wear pink in solidarity)