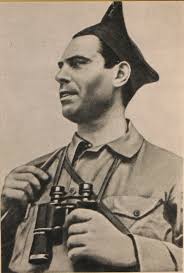 With forty years of  fighting, of exile, of jailings, of living underground, of strikes, and of insurrection, Beunaventura Durutti, the  legendary Spanish revolutionary and Anarchist lived many lives. Uncompromising, intransigent revolutionary, he travelled a long road from rebellious young worker to the man who refused all bureacratic positions, honours, awards, and who at death was mourned by millions of women and men. Durutti believed and lived his belief that revolution and freedom were inseperable.
He was born the son of a railway worker on July 14th 1896 in Leon, a city in central Spain. Aged 14 he leaves school to become a trainee mechanic in the railway yard. Like his father, he joins the socialist UGT union. He takes an active part in the strike of August 1917 when the government overturned an agreement between the union and the employers. This soon became a general strike throughout the area. The government brought in the army and within three days the strikers had been crushed. The troops behaved with extreme brutality, killing 70 and wounding 500 workers. 2,000 strikers were jailed.
Durruti managed to escape to France, where he came into contact with exiled anarchists, whose influence led to him joining the anarchist CNT union upon his return in January 1919. He joins the fight against dictatorial employers in the Asturian mines and is arrested for the first time in March 1919; he escapes and over the next decade and a half he throws himself into activity for the CNT and for the anarchist movement.
These years see him involved in several strikes and being forced into exile. Unwittingly the Spanish government ‘exported’ rebellion, as Durruti and his close friend Francisco Ascaso happily joined the struggle for freedom wherever they ended up, in both Europe and Latin America.
The Spanish monarchy fell in 1931 and Durruti moved to Barcelona; accompanied by his French companion Emilienne, pregnant with their daughter Colette. He joined the Iberian Anarchist Federation (FAI), a specifically anarchist organization, and together with other militants they form the ‘Nosotros’ group. These were members within the CNT of a radical tendency that harboured no illusions with respect to the recently proclaimed Republic, maintaining that the moment was ripe for continued progress towards a social revolution.
With the electoral victory by the liberal/reformist Popular Front in February 1936, Left and Right were on a collision course, initiated very rapidly by Franco’s military rebellion on July 19th 1936. The CNT and the FAI confronted the army with courage, organization and mass mobilizations.
They triumphed in much of Spain despite the fascist superiority in weapons and resources. The anarchist contribution was decisive in resisting the fascists throughout the country and in Catalonia defeated the rebels singlehandedly, Durruti being one of the boldest fighters in this battle.
Jose Buenaventura Durruti, always fought for the poor and downtrodden, and against the State, whether of the social democratic, fascist or marxist varieties When Spanish fascists attempted to overthrow  the  Republican government on July 19th 1936, Durruti and other comrades helped put down the uprising in Barclenoa. He became a member of  the Anti fascist Militia Committee and led the "Durruti" Column an almost  mythical  group of CNT militants to the  Zaragoza front. The Durruti column was able to liberate  much of Aragon. He  was an inspiration to many as a partisan of the Spanish people with an internationalist vision, who for him personally revolutionary thought and action went hand in hand.
In 1936, after the liberation of Aragon from Franco's forces, Durruti was interviewed by Pierre van Paasen of the Toronto Star. In this interview he gives his views on Fascism, government and social revolution despite the fact that his remarks have only been reported in English - and were never actually written down by him in his native Spanish, well worth reading and can be found here https://libcom.org/history/buenaventura-durruti-interview-pierre-van-paasen
On 14th November Durutti arrived in Madrid at the height of the  civil war from Aragon,by air with 5,000 men( numbers vary according to different accounts). The column had to go by train as all the railway tracks had been bombed. He went  to the frontline on the 16th.
Tragically Durruti on the 19th November  1936, he was shot dead  by a sniper, receiving a bullet to his chest, as he rallied his militia  to continue their resistance after days of fighting without respite. he died the following day, at the age of 40.  His death was a tragedy for all free thinkers, in the fight against fascist tyranny. His death was also a turning point in the Spanish Revolution and one of the events that lead to the defeat of the revolution.
When his body was returned to Barcelona  over 500,000  people took to the streets on this day November 22 1936  to follow his funeral procession, the  biggest funeral in Spanish history, a tribute to the place he played in peoples hearts, his coffin draped with the familiar diagonal red and black flag. A hero to the Spanish working class ,and today  Durruti remains a lasting icon of anarchism, both in Spain and around the world, a man who.was determined to leave this world a better place than when he entered it. With the rise again of the far right, no better  time than to remember this inspirational man who died fighting against fascism in the Spanish Civil War.

This book is his definite biography :

"  We  have always  loved in slums and holes in the wall. We will  know how to accommodate ourselves for  time. For you must not forget we can also build. It is we who built the palaces and cities here in Spain and America and everywhere. We the workers, can build others to take their place. And better ones. We are not in the  least afraid of ruins. We are going to inherit the earth. There is  not the slightest  doubt about that. The bourgeoisie might blast and ruin its own world before it leaves the stage of history. We carry a new world, here in our hearts. That world is growing every minute."-  Beunaventarra Durruti 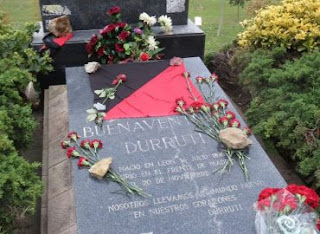