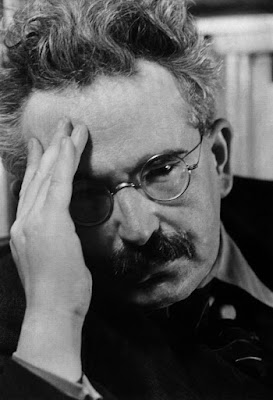 Walter Benjamin  who was born on July 15, 1892 in Berlin was a German Jewish Marxist literary critic, essayist, translator, philosopher and renaissance man of letters, who wrote on topics ranging from art history and aesthetics to linguistics, politics, and psychedelic drugs, who is now considered to have been the most important German literary critic in the first half of the 20th century.He was influenced by the critical theory of the Frankfurt School, by Marxism, by German idealism  and by Jewish mysticism.In his brief life, Benjamin developed many of the themes that now serve as an indispensable foundation  for literary and cultural criticism. "Criticism" he observed, "is a matter of correct distancing. It was at home in a world where prospectives and prospects counted and where it was still possible to adopt a standpoint. Now things press too urgently on human society." This could have been written yesterday, it was published in 1928.
Born into a Jewish middle class family his education took him to Berlin, Munich and Bern before he returned back to Berlin in his late twenties,  student of philosophy, Benjamin had been intent on a career as an academic but his ambition was thwarted when the University of Frankfurt dismissed his doctoral thesis on the origins of German tragedy as outlandish.
Because of his anti-fascist advocacy, the Gestapo requested Benjamin’s expatriation from Paris in February 1939. When France declared war on Germany, all Germans living in France were interned in camps. Benjamin was sent to the village of Nevers in Burgundy, but was released due to interventions by his friends. He continued to work, but in June 1940 he was forced to flee Paris.
He then attempted to travel through neutral Spain by crossing the Pyrenees on foot. On the night of September 26, 1940, he was falsely alarmed when he was stopped by General Franco’s border guards near Port-Bou. In his hotel room, unaware that he was not under suspicion and could have escaped to freedom he took his own life with an overdose of morphine, which he carried for in such an eventuality. The local doctor, however declared it a natural death and Benjamin was given a Catholic burial in the municipal cemetery, under a wrong name.
His tragically short life became the subject of Jay Parini's novel Benjamin's Crossing. Charles Bernstein and Brian Ferneyhough wrote the opera Shadowtime based on his life.His dislocation, his not at homeness and willful alienation, mark him as a kindred spirit to Kafka and Baudelaire.More than 70 years after his death his work continues to speak compellingly to the modern reader.
In the following excerpt from an unfinished essay, Capitalism as Religion  by Walter Benjamin written in 1921 and published in the Volume VI of his Collected Writings (in German). Here, Benjamin characterises capitalism not as something that resembles a religion, but as an actual religious cult,without mercy or truth, leading humanity to the house of despair.
Directly based on Max Weber's Protestant ethic and the Spirit of Capitalism, but – in ways akin to Ernst Bloch or Erich Fromm – it transforms Weber's 'value-free' analysis into a ferocious anti capitalist argument, probably inspired by Gustav Landauer's romantic and libertarian socialism. The translation is by Chad Kautzer.
Beginning in the late middle ages and reaching its first plateau in the late eigthteenth century, the capitalist market began to assume an autonomous, god-like existence. Since then we have made fetishes out of commodities as we believe we can derive sensuous pleasure from their magical properties. We sacrifice our time, our families, our children our forests, our seas and our land on the altar of the market., the God that some owe their deepest allegiance.
Capitalism is a totalitarian system that engulfs the entire social and cultural structure at considerable cost to this fragile earth of ours. Under it's influence people plunder,kill, steal , ravage nations and wage wars. Capitalism isn't about  bringing you contentment, it's about making you feel discontentment and under the Tory Government they have already shown us that they want pure privatisation  through unfettered Capitalism. So those who already have, will increase their wealth and those who do not will struggle to live. The altar of greed is truly where they worship. Thanks Walter for reminding me.


“One can behold in capitalism a religion, that is to say, capitalism essentially serves to satisfy the same worries, anguish, and disquiet formerly answered by so-called religion. The proof of capitalism’s religious structure – as not only a religiously conditioned construction, as Weber thought, but as an essentially religious phenomenon – still today misleads one to a boundless, universal polemic. We cannot draw close the net in which we stand. A commanding view will, however, later become possible.

Three characteristics of the religious structure of capitalism are, however, recognizable at present. First, capitalism is a pure religious cult, perhaps the most extreme there ever was. Within it everything only has a meaning in direct relation to the cult: it knows no special dogma, no theology. From this standpoint, utilitarianism gains its religious coloring. The concretization of the cult connects with a second characteristic of capitalism: the permanent duration of the cult. Capitalism is the celebration of the cult sans rêve et sans merci.¹ Here there is no “weekday”, no day that would not be a holiday in the awful sense of exhibiting all sacred pomp – the extreme exertion of worship. Third, this is a cult that engenders blame. Capitalism is presumably the first case of a blaming, rather than repenting cult. Herein stands this religious system in the fall of a tremendous movement. An enormous feeling of guilt not itself knowing how to repent, grasps at the cult, not in order to repent for this guilt, but to make it universal, to hammer it into consciousness and finally and above all to include God himself in this guilt, in order to finally interest him in repentance. This [repentance] is thus not to be expected in the cult itself, nor in the reformation of this religion – which must hold on to something certain within it – nor yet in the denial of it. In the essence of this religious movement that is capitalism lies – bearing until the end, until the finally complete infusion of blame into God – the attainment of a world of despair still only hoped for. Therein lies the historical enormity of capitalism: religion is no longer the reform of being, but rather its obliteration. From this expansion of despair in the religious state of the world, healing is expected. God’s transcendence has fallen, but he is not dead. He is drawn into the fate of man. This passage of “planetary man” [Planeten Mensch] through the house of despair is, in the absolute loneliness of his path, the ethos Nietzsche describes. This man is the Übermensch, the first who knowingly begins to realize the capitalist religion. The fourth characteristic [of the religious structure of capitalism] is that its God must become concealed and may only be spoken of in the zenith of his culpability. The cult becomes celebrated before an immature deity, [while] every image, every idea of it injures the secret of its maturity.

Freudean theory also belongs to the priestly rule of this cult. It is thoroughly capitalistic in thought. The repressed, the sinful imagination, is, at bottom, still an illuminating analogy to capital – to which the hell of the unconscious pays interest.

This type of capitalist, religious thinking magnificently reconciles itself in Nietzsche’s philosophy. The thought of the Übermensch loses the apocalyptic “leap” not by changing its ways, atonement, purification, [or] penitence, but in the apparently continuous, but in the end, rupturing, discontinuous intensification. That is why intensification and evolution are incompatible in the sense of “non facit saltum.” The Übermensch is the one who without changing, arrived, who streaked through the heavens – historical man.

Capitalism is a purely cultic religion, without dogma. Capitalism itself developed parasitically on Christianity in the West – not in Calvinism alone, but also, as must be shown, in the remaining orthodox Christian movements – in such a way that, in the end, its history is essentially the history of its parasites, of capitalism. Compare the holy iconography of various religions on the one hand with the banknotes of various countries on the other: The spirit that speaks from the ornamentation of banknotes.

Christianity in the time of the Reformation did not encourage the emergence of capitalism, but rather changed itself into capitalism.”