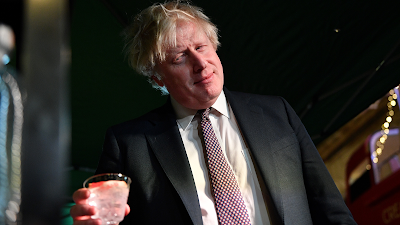 Vomiting
Excessive boozing
Fisticuffs
Partying until 4.35am (before Prince Philip's funeral)
Broken swing
Secret Santa
Cleaners & security staff bullied
Red wine on walls
Karaoke
Sitting on laps
"We seem to have got away with it" - Martin Reynolds ( Downing Street Chief )
Boris Johnson also spent almost £30k in takeaways in 8 months. Or about the annual income of four pensioners. I wonder if anyone  in the NHS remembers getting drunk at work until after 4am during lockdown? Doubt it very much. The reason Party Gate has taken up so much time is because the Tories refused to give a straight answer, and played us off against Sue Gray and the Met Police for five bloody months!!  The report absolutely damns  Boris Johnson who  should have resigned in November!
SNP's Ian Blackford said:  "If you don't send a letter (to the 1922 committee) how will you ever look your constituents in the eye again"
Then I read that Boris Johnson was apparently so sorrowful at the 1922 Committee that Tory MP Caroline Johnson told the PM to stop being so apologetic and get on with the job.
If the Tories had any honour there would be 300 or so letters in with the 1922 Committee tonight. There aren’t. Not only is there no honour, but there is obvious support as a result for the fascism Johnson is pursuing.
They also support the gravy train that they've been riding on for the last two and a half years.It's not about the electorate or the country it's about the party,the Conservative Party. Allegra Stratton is still the only resignation, and she never went to a party.
We are all  being taken for mugs, and completely fucked over by this immoral shower of shit bags. They want us to move on and forget about Tory corruption, partygate, lies and deceit, 180k covid related deaths.
The only people who should move on after the party gate scandal are Boris Johnson and the Conservative MPs who are supporting him. These MPs are putting their party before the interests of the country, and are belittling the anger and hurt of bereaved families and everyone who complied. They are all a bloody disgrace. I won’t forget, will you? .Johnson who broke the rules he set and lied repeatedly should no longer be prime minister,.It’s that simple. No deflection, no flim flam. He should be gone. Enough is enough.
Posted by teifidancer at 22:27