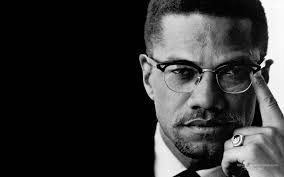 Malcolm X  originally Malcolm Little (and later also known as el-Hajj Malik el-Shabazz) in Omaha, Nebraska, on 19 May 1925 remains today  a controversial figure.The fourth of eight children of  outspoken Baptist ministe the Reverend Earl Little and his wife, Louise. Soon after Malcolm's birth the Littles moved to the outskirts of East Lansing, Michigan. When Malcolm was six, his father died, presumably murdered by the Black Legion, a violent racist group similar to the Ku Klux Klan, and the Little home life became more and more difficult. Louise was eventually placed in the state mental hospital, and her children were declared wards of the state. In 1941 Malcolm moved to Boston to live with his half sister, Ella. He became caught up in the nightlife of Boston and, later, New York. After a few years in the underworld of Harlem, selling drugs and working for call-girl services, Malcolm began a burglary ring in Boston. In 1946, at the age of twenty-one, he was arrested for armed robbery and sent to prison.
During his six years in Charlestown Prison, Concord Reformatory, and Norfolk Prison, Malcolm underwent a spiritual and intellectual transformation.It was  during this period that Malcolm’s brother alerted him to the teachings of the Nation of Islam (NOI) and encouraged Malcolm to convert to the Muslim faith. Intrigued by the NOI, Malcolm began studying the work of Elijah Muhammad who preached about systemic oppression and fought for a world separate from one inhabited by White people.

By the time Malcolm X was released from prison he was a devout follower and soon after meeting Muhammad and agreeing to work for NOL,changed his name to Malcolm X, the X representing the unknown name of his African ancestors and their culture that had been lost during slavery. As well as the “x” that many slaves received as a brand on their upper arm .
Malcolm X was soon appointed as a minister and national spokesperson for Nation of Islam.  He was also charged with establishing new mosques around the country. He returned to Boston and became the Minister of the NOI’s Temple # 11. He was also selected to lead the NOI’s mosque #7 on Lennox Avenue in Harlem and is credited with other establishments in Detroit, Michigan and Philadelphia, Pennsylvania. His public speaking and media appearances also contributed to increased awareness and interest in the Nation of Islam. His commanding stage presence, quick wit, and erudition, combined with the authenticity of his experience as a street hustler, made Malcolm a remarkable orator and a dynamic leader. In fact, Malcolm X is largely credited with building the Nation of Islam from a tiny sect to a significant force in urban black America, increasing  the NOI membership from 500 in 1952 to 30,000 in 1963.
The public nature of his work, however, led the FBI and national government to pay very close attention to Malcolm X. At certain points the NOI organizations Malcolm X was involved in were infiltrated by the FBI and the group’s communications and activities were heavily monitored.
In 1963 there was increasing jealousy in the Nation of Islam over Malcolm's increasing celebrity, and Malcolm's discovery of violations of the Muslim's strict moral code by the Honorable Elijah Muhammad. Malcolm had learned that  his mentor, was indulging in secret relationships with as many as six women  within the NOL, some of which  produced children. The teachings of NOL specified celibacy until marriage. Elijah was not married to any of them. He asked Malcom to help cover up the affairs  and the evidence of children, he obeyed and kept quiet.
Nevertheless, Malcolm cold not look  past Elijahs deception and in March 1964 terminated his relationship with the NOL. Once out from the strict teachings of the Nation of Islam, Malcolm drifted from the primarily spiritual philosophy of the Nation to a more political black nationalism.On April 12, 1964, one month after splitting with the NOI, Malcolm X gave his "Ballot or the Bullet" speech at King Solomon Baptist Church in Detroit (he'd given the address nine days earlier in Cleveland, but the Detroit version is regarded by some scholars as definitive). It was the fullest declaration of his black nationalist philosophy. Mainstream black ministers in Detroit tried to block Malcolm X from using the church, saying "separatist ideas can do nothing but set back the colored man's cause." But the church hall had already been rented out for the event.
"The Ballot or the Bullet" became one of Malcolm X's most recognizable phrases, and the speech was one of his greatest orations. Two thousand people – including some of his opponents -- turned out to hear him speak in Detroit.. President Lyndon Johnson was running for reelection in 1964, and Malcolm X declared it "the year of the ballot or the bullet." He outlined a new, global sensibility in the fight for racial justice: "We intend to expand [the freedom struggle] from the level of civil rights to the level of human rights."
In the spring of 1964, when Malcolm X gave his "Ballot or the Bullet" speech, he was regarded by a majority of white Americans as a menacing character. Malcolm X never directly called for violent revolution, but he warned that African Americans would use "any means necessary" – especially armed self defense – once they realized just how pervasive and hopelessly entrenched white racism had become.
Malcolm was now free of the NOI's ban on members participating in the mainstream civil rights movement. He encouraged black militants to get involved in voter registration drives and other forms of community organizing to redefine and expand the movement.

The day after his Detroit speech, Malcolm X embarked on an overseas tour that included a life-changing pilgrimage to the Muslim holy city of Mecca. Known as the Hajj, the pilgrimage must be carried out at least once in a lifetime by every able-bodied Muslim who can afford to do so. The racial diversity he experienced in the Middle East, especially among Muslims, led him to discard his strict notions of black separatism for a wider, more inclusive movement against white supremacy and colonialism  and, tentatively, to a more internationalist philosophy--Pan-Africanism.He founded his own religious organization, the Muslim Mosque, Inc. converted to Sunni Islam, and  was a devout Muslim until the day he died.
Malcolm X returned to the United States with a new energy and vision for his work. He began to not only direct his work towards African Americans but to people of all races and ethnicities. He preached about human rights, freedom, action, and community building. If was also at this time that Malcolm and Martin Luther King,Jr began to move closer to each other, Their unity if given the opportunity to fully develop, could have led to a deeper unity of the African American community and the strengening  of the all-sided fight for peace freedom and justice.
While re-establishing himself, however, the old tensions with the Nation of Islam were still festering and rumors began that Malcolm X had been targeted for assassination. Attempts were made on his life and threats were made against his wife, Betty, and four daughters. In February of 1965 his family home was firebombed, and while everyone made it out alive, no one was ever charged with the crime.
It was only one week later, on February 21, 1965, in Manhattan’s Audubon Ballroom when three men rushed Malcolm X on stage during a speaking engagement and shot him 15 times at close range. He was pronounced dead upon arrival at New York’s Columbia aged only 39.
In death, he became a seminal figure to an increasingly militant generation of young African Americans, a beacon for activists in the 1960s Black Power and Black Arts movements, inspiring and informing many others in their fight for social justice and equality.His legacy lives on because Malcolm X was one of the most dynamic, dramatic and influential figures of the civil rights era. He was an apostle of black nationalism, self respect, and uncompromising resistance to white oppression. A polarizing figure who both energized and divided African Americans, while frightening and alienating many whites. He was an unrelenting truth-teller who declared that the mainstream civil rights movement was naïve in hoping to secure freedom through integration and nonviolence. The blazing heat of Malcolm X's rhetoric sometimes overshadowed the complexity of his message, especially for those who found him threatening in the first place.
His major literary achievement, The Autobiography of Malcolm X (1965), composed during the last two years of his life with the writer Alex Haley, contains a montage of Malcolm's perspectives and only invites speculation as to which direction Malcolm's philosophy would have taken. The Autobiography, published posthumously, stands as a major twentieth-century African American literary work. Its orality, its political intentions and ramifications, and its promise of unspoken truths about the African American experience all place it firmly in African American autobiographical traditions. n 1998 Time named The Autobiography of Malcolm X one of the ten most influential nonfiction books of the 20th century
Malcolm X today carries tremendous weight as a cultural icon, most notably in the films of Spike Lee. He has been used to symbolize an alternative, more militant vision of social protest than Martin Luther King, Jr.'s nonviolence, and his name appears in rap and other African American poetry as a symbol of black pride and for many people he remains an icon. An individual who was not raid to challenge oppression, who was courageous enough to change his mind .and admit his mistakes, but foe  may Malcolm X was no sell out, and for that reason his legacy lives on and on.

No Sell Out Malcolm X