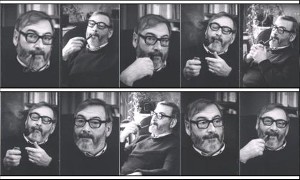 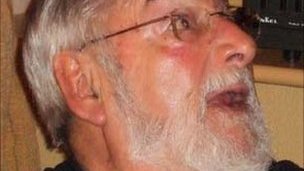 I have admired this poets work for a while, and recently in Hay-on-Wye I was lucky to find the collected poems of Idris Davies  ( http://teifidancer-teifidancer.blogspot.com/2010/02/idris-davies-poet-of-people.html ) in the poetry Bookshop. Imagine my joy when I delved further into the book, it seems that I had bought a book actually owned by Mr Garlick, for their was his name in the inside cover wth the date of Mehefin 1972 ( June) underneath, and contained within were this poets lovely annotations , which to me were lovely additions to a superb book. So when I got back to West Wales I delved into my bookshelves to get reacquainted with Mr Garlicks work. My dear  partner Jane  kindly bought me 3  lovely volumes of his.
I decided I would do a post on him, but this was tinged with sadness, because having rediscovered him I found he had passed away back in March. How I missed this news I really don't know.
I first discovered his work through the pages of the now defunct Welsh Literary magazine ' The Anglo-Welsh Review' where he had been editor.
Born in 1926 in London he subsequently spent most of his life in Wales, coming to Llandudno to live with relatives when he was a schoolboy. He studied English at the University of Wales, Bangor where he also learned Welsh. After leaving University he worked as a teacher in Bangor, Pembroke Dock and Blaenau Ffestiniog, and from 1961 to 1967 at an international school in the Netherlands. From 1967 to his retirement in 1987  he was senior lecturer at Trinity College, Carmarthen, where he lived until moving to a care home in Cardiff.
He developed a nationalistic, almost romantic view of Wales, his adopted country and became preoccupied with its two languages. Whilst at Pembroke Dock he founded in 1949 the magazine 'Dock Leaves' which became the Anglo-Welsh Review.
At Blaenau Ffestiniog he became friends with his neighbour the writer 'John Cowper Powys' .http://en.wikipedia.org/wiki/John-Cowper-Powys and a friend  of R.S Thomas. He is today considered ine of the best mid 20th century English writers in Wales, alongside Harri Webb, R.S. Thomas, Dylan Thomas, John Tripp and Vernon Watkins.
A convert to catholicism in later years he confessed to being a born again Pagan, his poetry displayed great confidence, with considerable strucure and control combined with beautiful lyricism. A seculor struggle seems to swim sometimes underneath, but in the 1960s and 70s an allegiance with the emerging  civil rights movement emerged.
His influence I feel is bound to grow.
He passed away peacefully at 'The Forge Care Home' in Cardiff, having previously left the Roman Catholic Church.
I posted a poem of his back in November
http://teifidancer-teifidancer.blogspot.com/2010/11/raymond-garlick-auguries-of-guilt_11.html
, so here's' a few more.
R.I.P....

I speak from deep in Dyfed, little Wales
beyond both Wales and England, where like snails
upon the sea's green leaf the shells and sails

of ships of saints once bustled in the bays,
busy as bees about their lawful ways,
all raising up a honeycomb of praise;

from Dyfed, where Pryderi used to ride
and rule the seven green cantrefs; where beside
his bay Giraldus watched the lawn-sleeved tide

fawn on his castle piers at Manorbier,
and sighed, and rode off for another year
to Rome to gain the Holy Father's ear.

I speak from Dyfed, Wales within Wales, world
within world, within whose hearts lay curled
the flower from which Four Branches were unfurled-

a green and mighty myth where princes pass
and galleys glide on a sea of glass,
and poetry the wind that stirs the grass

So Iestyn staggers down the shore of speech
and trips and suddenly sits and takes his rest,
playing with sounds like pebbles on a beach;

then clambers up and totters proudly on
towards the sonorous vowels of the sea,
and casts a net of consonants upon

the wondrouswaters,angling for a word.
He waits and watches, drawing in his breath,
until the waves withdraw. Then like a bird

his less than two years'  tongue wings on its way
a singing syllable of sense, a sound
caught from the bounding chaos of the bay

Never before more splendidly was snug
thislitany of language on his lips,
nor Welsh more lovely tumbled from a tongue.

And who am I? You ask. My mask is spare.
I live in a rakish body framed
about a spine like a buckled spire

or twiste spring, my uncurled crown of thorn.
One crystal tear of God, one devil's flame,
lies clear or leaps on this lop-sided throne.

As earth desires the rain, the womb the seed, pain
rest, coception birth, the burning lover
his beloved's breast: just so, yo pin

a syntax on existence and to voice
the vovels of being is the hot desire
locked in my knotted limbs and body's vice.

And thus I am, and thus you see me now:
a hustings for a heart wrapped in a wrack,
lusting for words to shape itself anew.

He has no small talk.
The bright warm-tap
of conversation-
whose silver lip

For him always
the private walk
to the well in the rock,
and the silent work-