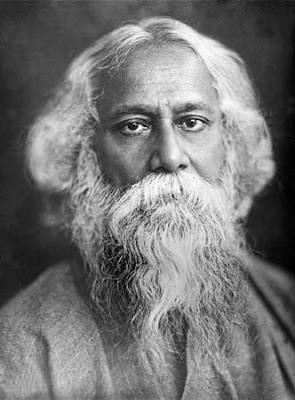 Rabindranath Tagore was a a Bengali polymath who reshaped his region's literature and music.   This Poet, Philosopher, Musician, Writer, Educator,.has been labeled the "King of Poets" for his beautiful and exquisite poetry..
Born in 1861 in Calcutta into a wealthy and prominent Brahman family. His father was Maharishi Debendranath Tagore, a religious reformer and scholar. His mother, Sarada Devi, died when Tagore was very young. Tagore received his early education first from tutors and then at a variety of schools. Among them were Bengal Academy where he studied history and culture. At University College, London, he studied law but left after a year - he did not like the weather. Tagore started to compose poems at the age of eight. Tagore's first book, a collection of poems, appeared when he was 17; it was published by Tagore's friend who wanted to surprise him.
In 1883 Tagore married Mrinalini Devi Rai chaudhuri, with whom he had two sons and three daughters. In 1890 Tagore moved to East Bengal (now Bangladesh), where he collected local legends and folklore, combining this with a great love of music, in particular Bengali music.
Tagore wrote 51 plays,13 novels, over 110 short stories ,over 1000 poems, over 2000 songs, two of which became the national anthem of India and Bangladesh, many, many letters and essays, painted over 2000 paintings, founded a university and a school, was a social reformer, did political work ,wrote on educational philosophy and wrote on the philosophy of science. Le't's just say he had a busy , productive life.
Tagore wrote his most important works in Bengali, but he often translated his poems into English.   In translation his poetry was viewed as spiritual and mercurial; his seemingly mesmeric personality, flowing hair, and other-worldly dress earned him a prophet-like reputation in the West,  highly influential in introducing the best of Indian culture to us and vice versa, and is considered one of the most outstanding creative artists to have emerged from India.
Tagore became the first non- European to be awarded the Nobel Prize in 1913 for his book ‘Gitanjali’, (Incidentally, I am fortunate to own a copy, mine from 1927, picked up from Amnesty International Garden party for 50p, rests neatly by my Edward Carpenter, another inspiration, that I have only recently discovered was actually a close friend and correspondent with Rabindranath. I like the fact two of their books have nestled side by side for years, before I realised their connection., in act of symbiosis ).
W. B. Yeats in particular was deeply impressed with this particular work and wrote an introduction. With this honour Tagore became famous in both India and the West. In 1915 Tagore was knighted by King George; however Tagore was to return his knighthood in protest of the Amritsar massacre (1919) where British troops killed more than a 1000 unarmed Indian demonstrators after General Reginald Dyer ordered troops to fire  machine guns into the crowd.
In the following poem, Tagore paints a moving picture of how he would like India to be, a country that is free from oppression or forced compulsion. When Tagore wrote this poem, India was struggling to break free from the British Raj.Although Tagore was good friends with Mohandas Gandhi, he disagreed with Gandhi’s political ideas concerning Indian independence. Rabindranath Tagore denounced British imperialism, yet he did not fully support or agree with Gandhi and his Noncooperation Movement. He viewed British rule as a symptom of the overall “sickness” of the social “disease” of the public. India  eventually got it's  Independence on August 15th 1947, after a long political and social struggle that would involve non violent and civil  disobedience  resulting in the partition of India into the dominions of India and Pakistan.
Yet many years after this poem was written it still  continues to have global appeal, speaking out to us, almost prayer like, seeking a a world that is not fragmented by prejudices or superstition. The yearning for a world where there is a freedom of the spirit, of the mind, of respect and dignity, where people do not cower in subjugation. Our world, our nations, ,are still far from free of all of its burdens, but Tagore at least here, gives us a glimpse of hope, a concern and search that I believe still deeply resonates .

Where the mind is without fear
and the head is held high;
Where knowledge is free;
Where the world has not been broken up into fragments
By narrow domestic walls;
Where words come out from the depth of truth;
Where tireless striving stretches its arms towards perfection;
Where the clear stream of reason has not lost its way
Into the dreary desert sand of dead habit ;
Where the mind is led forward by thee
Into ever-widening thought and action
Into that heaven of freedom, my Father, let my country awake.


The original Bengali language poem, "Chitto jetha bhayashunyo", was published in 1910 and included in the collection Gitanjali by Tagore.

Email ThisBlogThis!Share to TwitterShare to FacebookShare to Pinterest
Labels: #Rabindranath Tagore #Let My Country Awake (Where The Mind Is Without Fear) # Poetry