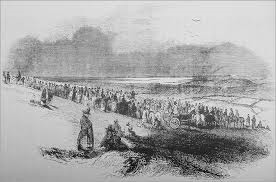 In 1843 the whole of west Wales was gripped in the civil disturbances known as the ‘Rebecca Riots’. Aimed mainly at the unfair tolls that were charged for the use of the turnpike roads, the rioters disguised with blackened faces and attired in women’s clothes would attack and destroy the offending tollgates and their attached gatehouses. This uprising of an oppressed peasantry against the burden of the tollgates has become part of the folk tradition of West Wales.
Farmers were  the hardest hit  as they used the roads to transport lime to their farms to improve the soil. In 1839, a new gate was erected at Efailwen to catch farmers who were evading the tolls. It was the last straw. Already there were too many toll gates; the market town of Carmarthen was like a fortress with twelve gates around it. The Efailwen gate was destroyed by a large crowd and when it was re-erected, a public meeting was announced 'for the purpose of considering the necessity of a toll-gate at Efailwen.' It concluded that there was no need and the gate was destroyed again.
The name 'Rebecca' was that of the mythical leader. 'She' had helpers like 'Charlotte', Nelly and 'Miss Cromwell' and followers (daughters). The name came from the Bible which Welsh chapels goers had learned to read in the previous couple of generations: 'And they blessed Rebekah, and said unto her, Thou art our sister, by thou the mother of thousands of millions and let thy seed possess the gate of those that hate them' (Genesis 24 Verse 60). The toll gates were seen as the property of the gentry ('those that hate them') as they were often the trustees of the turnpikes. The gates became a symbol of many different discontents about the land and the church (which was also seen as the church of the gentry). The rioters wore women's clothes and blackened their faces, for disguise, but also perhaps to suggest the idea that women were entitled to act to defend their families. Normally respectable people may have felt that in disguise they were symbolising their community rather then breaking the law as an individual.
Pat Molloy, an author of a book on the riots, said that Rebecca was a champion waiting to be called upon. To the country people there was a higher law than man's  but when man's law intruded into their world it was obeyed, provided that it accorded with their notion o natural justice. When it jailed or oppressed them they looked for justice, and when man's law refused them justice, or set too high a price on it, they knew instinctively where to turn. Then they looked to their Bibles for a sign, without which, right would not be on their side nor  success attend their endeavours. They found it, and they blessed Rebecca.
By the end of the summer 'The Rebecca Riots', which had ravaged these parts, was drawing to an end. The violent and clandestine attacks on the tollgates were being replaced by peaceful and open air meetings calling for political action. Perhaps 'the greatest of all these meetings' was held on the slopes of Mynydd Sylen near Llanelli, where it is claimed  that no less than three thousand people were in attendance. Farmers came from all over the south east of the area and colliers sacrificed  day's pay to attend.
On the 25th of August 1843 some of the most important and influential people addressed the meeting including the 'Rebecca' leader, Hugh Williams and the Llanelli landowner and magistrate William Chambers Junior JP. The Times reporter, Thomas Campbell Foster and the lithographer, William James Linton of the London Illustrated news reported on the event. As a result of the meeting a lengthy petition to Queen Victoria was drawn up calling for an end to the injustices.
Subsequently, attacks by Rebecca continued, but  with far less frequency. The main reasons being that the authorities had started to take notice and had begun to address some of the rioters grievances by looking into the problems here in West Wales. As a result they now moved away from violent tactics to holding mass meetings, like this one mentioned.  Other factors included the metering out of harsh punishments,as  rioters were caught and sentenced to transportation,  what with  the  arrival of troops,  and the increasing use of informants with the offer of financial rewards or the capture of the rioters leaders, to crush the rebellion,helped play a part too in the change of direction to a more moderate approach.
One of the  last of Rebecca’s attacks in Llanelli came on Saturday 30th September 1843, when she removed the Tyrfran Tollgate on the road to Felinfoel and dropped it down the shaft of a nearby coal pit. Social conditions  began to  change over the decade. Improvements in the laws controlling turnpikes came to pass in 1844, and the coming of the railway eased many of the transport problems in west Wales. People could move more easily to find work and this helped reduce pressure in rural areas for jobs. The ending of the Corn Laws in 1846, and attempts in 1847 to make the Poor Law less cruel, also helped.
The name 'Rebecca' though lived on. Over the years the Rebecca Riots have become part of the cultural identity of the Welsh, fuelling the idea of the werin/folk fighting for their rights, standing against tyranny and oppression.
In the 1860s and 70s local people protesting against the sale of fishing rights to outside interests in mid-Wales used the name again in their protests, as did farmers in the past fifteen years or so protesting about policies in agriculture. When the local community bought to right to levy tolls at a surviving toll in Porthmadog in the 1990s, they named it Rebecca and gave the money raised to local charities
Sadly though, the summit of  Mynydd Sylen is an unloved one, with ugly  masts, tatty barbed wire fences and rubbish at the nearest parking spot, rather disheartening considering its  historical significance


'And They Blessed Rebecca' by Pat Molloy

'The Rebecca Riots' by David Williams 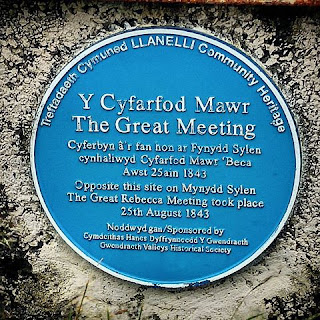