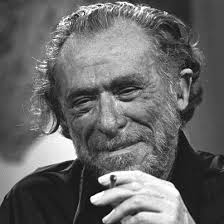 Ah Mr Henry Charles Bukowski. This is a man that I owe a lot of debt and gratitude, For those  not familiar, I hail  him for being  one of Americas  greatest poets, novelists and short story writers. His writing that  still continues to influence, one of the main reasons I attempt to write myself.
Born  in Andernach, Germany in 1926,as Heinrich Karl Bukowski,  he came to the United States at the age of three, he began writing at  a young age, and was first published in the 1940's, he would spend the next 20 years, working in  a series of menial jobs, while immersing himself in the world of booze and hard living.
At the age of 49, after years of heavy drinking and debauchery, he struck a deal with Black Sparrow Press that allowed him to quit a work ethic that he was not comfortable with, in a post office, to focus full time on his writing. The result was over 30 poetry collections, 6 novels and two feature films based on his life and works, making him one of the most prolific writers of the 20th Century.
His work was marked by an emphasis on the ordinary lives of poor Americans, the act of writing, alcohol, relationships, failure, depression, gambling, life and death, and drinking and more drinking. He was a poet who wrote without pretence, privilege or sheen, embracing what so many of us try to avoid. He was heavily influenced by the geography and atmosphere of his home city of Los Angeles, and all the senses that he witnessed and devoured.
He lived alongside  his words, alongside the margins of societies edge, with the down and outs, the wrecked, the outsiders, the hopelessly abandoned, the walking wounded. Beyond the literary schools, his work emerged  to break all traditional rules, against all that is conventional, beautifully sinful, uncompromising, but  never hypocritically  righteous, releasing poetry of such passion that I believe still matters today. Utilising free verse and spontanaeity, despite the idolation that was bestowed  upon him, he joined no clichés, refusing acceptance  into any literary community, in true essence of his rebellious spirit.
Blunt and outspoken, he saw the ugliness of the earth, and was not afraid to express his ways of seeing. Remembered because of the rawness and roughness and the many manifestations of ugliness that he saw in life, I try not to forget, the beauty and tenderness that he shared too.
In simple language, he simply used the inner rhythm of his voice, to release what I have realised to be a form of magic, no cleverness or pretence disguised, just a raw undiluted life affirming truth filled with his brutal honesty.
He died in  San Pedro, California on March 9, 1994 at the age of seventy-three, shortly after completing his last novel, Pulp,  but his spirit and his words live on.
So today I raise a sweet glass to my lips, unfortunately it's apple juice, i'm currently on the wagon, hey ho, will still gulp down thirstily his words of essential breath, that still continue to fill my heart with hope, in a world driven mad. So thank you kindly Charles, happy birthday. Cheers.

Here is a selection  of some of my favourite poems from his pen. There are so many to choose from. I hope you enjoy.

don't come round, but if you do.

yeah sure, I'll be in unless I'm out
don't knock if the lights are out
or you hear voices or then
I might be reading Proust
if someone  slips Proust under my door
or one of his bones for my stew,
and I can't loan money or
the phone
or what's left of my car
though you can have yesterday's newspaper
an old shirt or a  bologna sandwich
or sleep on the couch
if you don't scream at night
and you can talk about yourself
that's only normal;
hard times are upon us all
only I am not trying to raise a family
to send through Harvard
or buy  hunting land,
I am not aiming high
I am only trying to keep myself alive
just a little longer,
so if you sometimes knock
and I don't answer
and there isn't a woman in here
maybe I have broken my jaw
and I am looking for wire
or I am chasing the butterflies in
my wallpaper,
I mean if I don't answer
I don't answer, and the reason is
that I am not yet ready to kill you,
it means I don't want to talk
I am busy, I am mad, I am glad
or maybe I am stringing up a rope;
so even if the lights are on
and you hear sound
like breathing or praying or singing
a radio or the roll of dice
or typing -
go away, it is not the day
the night, the hour
it is not the ignorance of impoliteness,
I wish to hurt nothing, not even a bug,
but sometimes I gather evidence of a kind
that takes some sorting,
and your blue eyes, be they blue
and your hair, if you have some
or your mind - they cannot enter
until the rope is cut or knotted
or until I have shaven into
new mirrors, until the world is
stopped or opened
forever

the dead can sleep
they don't get up and rage
they don't have a wife.

her white face
like a flower in a closed
window lifts up and
looks at me.


the curtain smokes a cigarette
and a moth dies in a
freeway crash
as I examine the shadows of my
hands.

an owl, the size of a baby clock
rings for me, come on come on
it says as Jerusalem is hustled
down crotch-stained halls.

the 5.a.m, grass is nasal now
in hums of battleships and valleys
in the raped light that brings on
the fascist birds.

I put out the lamp and get in bed
beside her, she thinks I'm there
mumbles a rosy gratitude
so I stretch my legs
to coffin length
get in and swim away
from frogs and fortunes.

sometimes when everything seems at
its worst
when all conspires
and gnaws
and the hours, days, weeks
years
seem wasted -
stretched there upon my bed
in the dark
looking upward at the ceiling
I get what many will consider as
obnoxious thought
it's still nice to be
Bukowski


no help for that

a space
and even during,
the best moments
and the greatest times

we will know it

we will know it
more than
ever

we will wait
and
wait

the house next door  makes me sad
both man and  wife rise early and go to work
they arrive home early in the evening
they have a young boy and a girl
by 9.p.m all in the lights in the house are out
the next morning both  man and
wife rise early again and  go to
work.
they return in early evening,
By 9 p.m. all the lights are
out

the house next door makes me
sad.
the people are nice people, I
like them.

but I feel them drowning,
and \ I can't save them.

They are surviving.
they are not
homeless
but the price is terrible.

the flesh covers the bone
and they put a mind
in there and
sometimes a soul,
and the women break
cases against the walls
and the men drink too
much
and nobody finds the
one
but keep
looking
crawling in and out
of beds.
flesh covers
the bone and the
flesh searches
for more than
flesh.
there's no chance
at all:
we are all trapped
by a singular
fate.
nobody ever finds
the one.

your life s  your life
don't let it  be clubbed into dank submission
be on the watch
there are ways out
there is a light somewhere,
it may not be much light but
it beats the darkness.
be on the watch
the gods will offer you chances,
know them,
take them.
you can't beat death in life, sometimes
and the more often you  learn to do it,
the more light there will be
your life is your life
know it while you have it
you are marvellous
the gods wait to delight
in you.

not much chance,
completely cut loose from
purpose,
he was a young man
riding a bus
through North Carolina
on the way to somewhere
and it began to snow
and the bus stopped
at a little cafe
in the hills
and the passengers
entered
he sat at the counter
with the others,
he ordered and the
food arrived,
the meal was
particularly
good
and  the
coffee,
the waitress was
unlike the woman
he  had
known,
she was unaffected,
there  was a natural
humor which came
from her
the fry cook said
crazy things
the dishwater
in  back
laughed, a good
clean
pleasant
laugh
the young man watched
the snow through the
windows
he wanted  to stay
in that café
forever
the curious feeling
swam through him
that everything
was beautiful
there,
then the bus driver
told the passengers
that it was time
to board,
the young man
thought, I'll just sit
here, I'll just stay
here,
but then
he rose and followed
the others  into
the bus
he found his seat
and looked at the cafe
through the bus
window,
then the bus moved
off, down a curve,
downward, out of
the hills,
the young man
looked straight
forward,
he heard the other
passengers
speaking
or other things,
or they were
reading
or attempting to
sleep,
they had not
noticed
the
magic
the young man
put his head to
one side
closed his eyes,
pretended to
sleep,
there  was nothing
else to do-
just to listen to the
sound of the
engine
the sound  of the
tyres
in the
snow.

one for the shoeshine man

If you see me grinning from
my blue volks
running a yellow light
driving straight into the sun
I will be locked  in the
arms of a
crazy life. 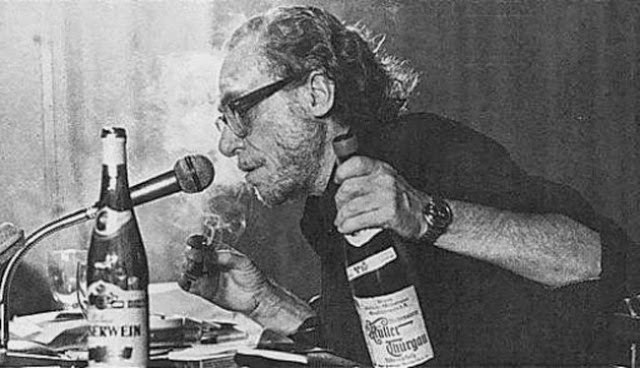 Love is a Dog from Hell - Charles Bukowski;1977

Play the Piano Drunk like a percussion instrument until the fingers begin to bleed
-Charles Bukowski; 1978

Charles Bukowski; Locked in the arms of a crazy life- Howard Sounes; 1996


I have posted poems from  Bukowski, several times over the years, here is a link to two of them ;-