War, injustice, and repression starts here. Thousands of people are coming together to stop it. Be part of it! Join the protests and add your name to the call to Stop the Arms Fair
On 12 September, the international weapons industry plans to set up shop in  East London at a huge arms fair DSEI, the weapons sold here fuel the death and destruction duel the and injustice perpetrated by militaries, police forces and at borders around the world. For one week every two years, arms companies like BAE Systems, Lockheed Martin, Airbus etc etc display their weapons to buyers from around the world, including  countries in conflict, authoritarian regimes and countries with serious human rights problems. Weapons that have been used to crush pro-democracy movements around the world. Many of the biggest companies at DSEI are central to the Trident replacement and the nuclear arms race – spending billions to kill millions.
In 2015, hundreds of people took part in a week of action - the biggest ever protests against the DSEI. For six days entrances were blocked, disrupting the set up o the fair. 2017 is set to be even bigger. Join actions at the gates every day from 4-11 September, stopping the arms fair before it starts. If you can't be there in person, you can still make sure the opposition is the biggest ever.  As the September 4th start date edges closer, early actions to draw attention to protests against this annual gathering of the merchants of death have begun to filter in.
Posters have been put up around London by activists using the increasingly popular method of hijacked bus hoardings. 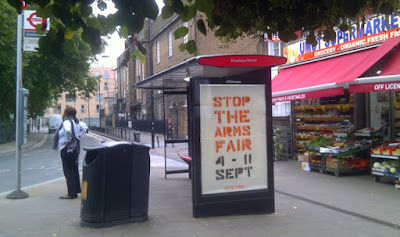 Stop the Arms Fair is regularly updating  on social media in advance of the event and has been putting up useful tips such as on knowing your rights on its website. A full schedule off events has also been published of what's going on during the week, see below

Find out more ways to get involved at :-


The latest annual report from the government’s Defence and Security Organisation shows that the UK won £6bn of arms deals in 2016 – representing 9% of the global market. Half of the total value was to the Middle East.Over 10 years, the report ranks Britain as the second biggest arms dealer in the world behind the US.
A telling example of the blood money and lucrative profits to be made by the revolving door between  government departments and arms companies is the case of Elbit Systems and former British army General Dick Applegate who went on to become chairman of Israel arms company Elbit Systems IK branch in 2011.
According to Campaigm Against Arms Trade:"In 2012 the Sunday Times exposed Applegate, ewcording him boasting of how he lobbied to secure 500m of government money or Elbit. Appleton  was filmed admitting he'd applied pressure by 'infecting; the system at every level."
Lets remember that the UK government helps to organise this arms fair, and invites these military buyers from around the world, and helps arms companies to make deals, at taxpayer expense.Theresa May’s Government  also exports weapons to 22 out of 30 countries on their own human rights watchlist. A vicar’s daughter should know better.
The arms industry's influence is all pervasive at every level of government influencing both foreign policy and public spending. It means that instead of criticising abuses committed by regimes such as Saudi Arabia, the British government  goes out of it's way to sell them more weapons.
Deals  hatched and made at the DSEI Arms Fair destroy lives, create  mayhem and destruction. This has to stop, and together we can stop it. These profiteers of human misery should be given no welcome.

P.P.S. Are you in the Labour Party? If so, please take urgent action to ask your Constituency Labour Party to support a Stop Arming Saudi contemporary motion for Conference.

Another World is Possible - Stop the Arms Fair 2017