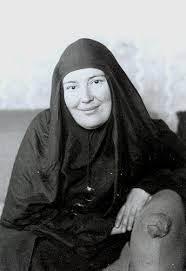 Hoffman: If we release you, will you give your word never again to aid Jews?

Father Dimitri: I can do no such thing. I am a Christian and must act as I must.

(Hoffinan struck the priest across the face.)

Hoffman: Jew lover! How dare you talk of helping those swine as being a Christian duty!

Father Dimitri: (holding up the cross from his cassock): Do you know this Jew?

For this Father Dimitri was knocked to the floor.

Mother Maria and those arrested with her were all sent to concentration camps--the men to Buchenwald and Dora and Mother Maria to Ravensbruck. There, as prisoner Number 19263, she continued her ministry among her companions, with the strength of her faith giving them encouragement and love in the midst of hopelessness and despair. Finally, Maria, her health broken, could no longer pass the roll call on Good Friday 1945. She stepped into the line with those women condemned to die, hoping to inspire them to meet their fate with faith in God. As one witness wrote, “She offered herself consciously to the holocaust . . . thus assisting each one of us to accept the cross. . . . She radiated the peace of God and communicated it to us.” Mother Maria Skobtsova was  killed in the gas chamber at Ravensbruck concentration camp on March 31, 1945, Holy Saturday, only a week before the camp was liberated.
In 1985, Yad Vashem recognized her as Righteous Among the Nations for her work saving Jews from the Holocaust, and in 2004, with some controversy, she was a former socialist revolutionary who was twice-married for starters, and she remained an intellectual of leftist bent throughout her life, the fact that she smoked, and her somewhat heterodox preaching,  the Russian Orthodox Church canonized her as a martyred saint.
Posted by teifidancer at 23:40