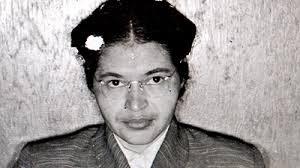 It was on this day in 1955 when a simple act of defiance elevated a seamstress in Montgomery, Alabama, into a pivotal symbol in America's civil rights movement. Rosa Parks, a 42-year old African American woman who worked as a seamstress, boarded a Montgomery City Bus year old  to go home from work. At that time, Afro-Americans in the United States suffered the humiliation - especially in the South - of not being able to share the same public places with whites: schools, restaurants, waiting rooms. Segregation reached such a point that “only white” or “not black” signs were displayed in the bathrooms. The Jim Crow laws, inherited from 19th century slavery, were designed to make African Americans feel inferior and thus keep them marginalized from society.
Only whites could use the front entrance of buses , and in addition to this, a section of the bus would be reserved for only white passengers, whether they were there or not. If a black passenger sat in these seats, or even directly behind, they could be arrested and would face the risk of being attacked, and possibly even killed, by the KKK. At this time, lynching was quite popular and occasionally the white people would take a Negro man and put him to death. A few months before Rosa Parks decided to not give up her seat, 14-year old Emmett Till had been killed in Mississippi for simply “looking at a white woman”.
With an understanding of the severity of this discrimination and intimidation, we can appreciate how significant it was when one lone woman, said “no” Contrary to popular belief, Rosa Parks wasn’t too tired. She wasn’t incapable of leaving her seat when bus driver James F. Blake demanded her to do so. She was properly seated in the colored section, but because the white section was full, Blake attempted to move Parks back to accommodate the white patron.
Parks, the mother of the civil rights movement, made the decision to remain in her seat because she didn’t believe she should have to move because of her race, even though that was the law. Rosa sat in the middle seats, which could be used by blacks if no white required. When that part was full, the driver ordered her along with three other blacks, to give up their places to a young white man who had just gotten up. The others rose, but she remained motionless. Her defiance led to her arrest, and  four days later, Parks was convicted of disorderly conduct. but made her name a byword for freedom and justice, especially in the fight against inequality.In her memoirs she says
"People always say that I didn’t give up my seat because I was tired, but that isn’t true. I was not tired physically, or no more tired than I usually was at the end of a working day. I was not old, although some people have an image of me as being old then. I was forty-two. No, the only tired I was, was tired of giving in. I knew someone had to take the first step and I made up my mind not to move. Our mistreatment was just not right, and I was tired of it."
It must be noted that Rosa  wasn't the first person to have been arrested in Montgomery for refusing to give up seats , Claudette Colvin, a fifteen year old girl, had been convicted for refusing to give up her seat to a white person earlier in the year.  Claudette's case had already created a desiree by some civil rights activists to have a boycott of the buses.
Rosa's action though provided more momentum, and ended up giving voice to the movements for the end of  segregation that had already begun to be noticed. A 26 year old Baptist pastor named Martin Luther King proposed a city wide boycott of public transportation at a church meeting. On December 5th, 1955, the Montgomery Bus Boycott began. Since African Americans made up about 75 percent of the riders in Montgomery, the boycott posed a serious economic threat to the company and a social threat to white rule in the city. Out of Montgomery's 50,000 African American residents, 30,000 to 40,000 participated. They walked or bicycled or car pooled, depriving the bus company of a substantial portion of its revenue. The boycott lasted 381 days, and proved to be effective, causing the transit system to run a huge deficit. After all Montgomery's black residents were not only the principal boycotters, but also the bulk of the transit system's paying customers.The Montgomery bus boycott was an impressive exercise in solidarity, unity and resistance. 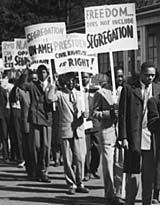 The successful boycott was a precursor to sweeping social change. The simple act of Parks refusing to give up her seat on a bus–and the resulting boycott–helped spawn civil rights legislation that would soon outlaw race discrimination in housing and employment. The Civil Rights Act of 1964 and  Voting Rights Act of 1965, prohibiting racial discrimination in voting, would follow. The constant factor driving the change toward equality was focused protest. With new self respect and a new sense of dignity , it was part of the beginning of a call for revolutionary change, the oppressed were determined to stand up and struggle until the walls of injustice had crumbled. It would be a long and hard journey, a battle that is still ongoing.
Parks remained active in promoting civil rights for the rest of her life, including opposing apartheid in South Africa.When Parks died at the age of 92, the front seats of buses in Montgomery and Detroit (Parks’ hometown at the time of her death) were draped with  black ribbons in her honor. In 2000, a library and museum in Montgomery were dedicated to Rosa Parks. The  Rosa Parks Museum https://www.troy.edu/rosaparks/ houses a replica of the bus that sparked the civil rights activists to boycott an important mode of transportation. The library and children's wing not only tell the story of Parks to its hundreds of visitors, but also those of Nixon, Gray, and Colvin. There is a "time travel" machine that transports the visitors from the 1800s to the Jim Crowe era and to 1950s Montgomery.
Let us remember her today, and acknowledge Rosa's act of quiet resistance, that still resonates down the corridors of time. She remains a symbol to all to remain free. Her actions resonate with us today, and echoes with the divestment movement  and the campaign of boycott  that were used against apartheid South Africa, are currently again utilised against the policies of apartheid Israel.Where people are once again daily defiantly taking nonviolent direct action in the name of freedom.
Like Rosa Parks before her,  many Palestinians  are currently struggling against unjust laws, in their  case the injustice of a 50-year military occupation that denies Palestinians their land, right to travel and self-determination. Israel maintains an apartheid system of democracy for Israeli Jews - and discrimination against Israelis of colour - second-class citizenship for Israeli citizens of Arab descent, and dispossession and disenfranchisement for Palestinian Arabs in the territories.
"Any law that uplifts human personality is just. Any law that degrades human personality is unjust," Martin Luther King said  "All segregation statutes are unjust because segregation distorts the soul and damages the personality. It gives the segregator a false sense of superiority and the segregated a false sense of inferiority."
Rosa Parks led by example. Hers was not the loudest voice or the most forceful. She did not create change by arrogance or violence. And while she was an apostle of the nonviolence movement, Mrs. Parks never saw herself that way. She never sought the limelight and was never really a political figure at all. But the power of her ideas was not constrained by continents or oceans. As the mother of the new civil rights movement, she left an impact on the entire world.
Nelson Mandela, after his release from prison, visited Detroit. When he got off the plane, politicians, businessmen, and other dignitaries waited to greet him. The one person he recognized was Rosa, and he began to chant, “Rosa Parks, Rosa Parks.”
When she was awarded the Presidential Medal of Freedom in 1996, she was recognised for remaining “committed to the cause of freedom, speaking out against injustice here and abroad” and demonstrating “in the words of Robert Kennedy, that each time a person strikes out against injustice, she sends forth a tiny ripple of hope which, crossing millions of others, can sweep down the walls of oppression.”
There will only ever be one Rosa Parks. She taught  people to struggle and how to triumph. May we all aspire to emulate her— to be strong and humble voices for justice.  Rosa Parks  reminds us that it  is possible for a single person to engage in an act of resistance against oppression to spark the seeds that can change the world. Ultimately, the power for change rests with the people. It always has. That’s the timely lesson of history. Let's  continuously fight  against disenfranchisement and segregation, and for those whose lives are still  tarnished by inherently racist systems.
Rosa Parks : A Quiet Revolutionary
Posted by teifidancer at 21:18