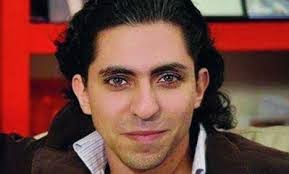 It is time to free Raif Badawi, the Saudi blogger who is to be publicly flogged 50 times, each week who is to be publicly flogged 50 times, each week over 20 weeks for daring to criticise  Saudi Arabian clerics, despite  appeals around the world for him to be pardoned.
Flogging is prohibited under  the convention against torture a law which Saudi Arabia is party to. Badawi was found guilty  last year of  insulting Saudi Arabian clerics on his blog Free Saudi Liberals, a now shut website he created.He was given a sentence  of a decade in prison and 1,000 lashes. A court  had originally sentenced him to 600  lashes and  7 years in prison, but a judge increased the sentence after appeal.
All that he did was write about secularism, and about what it meant for him, a free society and freedom of expression.He has become a symbol for many thousands of other men and women who are in prison for doing nothing more than expressing their opinion.
We must stand with him and condemn  the use of this cruel  inhuman and degrading punishment in all circumstances.
His flogging has been postponed on medical grounds,  but this does not mean his suffering has ended. His flogging could resume at any time.
Keep up the pressure.