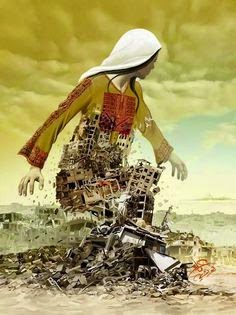 As Palestine seeks to join the International Criminal Court, powerful Palestine rises triumphantly: Despite the destruction, they remain steadfast, the Palestinian  voice grows stronger day by day - they have  not lost their hope or their dignity. Even though they have experienced pain and loss in an unimaginable way, they will not give up  until they get their deserved freedom, and an end  to their ongoing repression. The survival of the Palestinian  people is their strongest resistance, they do not see themselves as victims, but a people whose hopes and aspirations grow stronger everyday.
The right of the Palestinian people to self-determination remains undiminished and it is up to the international community to respect their rights and remind Israel of its obligation to respect this.
Remember too  that the International Criminal Court  specifically  finds that "Crimes against Humanity" under  the Rome Statute of 2007, Article 7, states that these offences include murder, forcible deportation or transfer of members of a group, torture, persecution of members of an identified group (ie the Palestinians ) and the crimes of apartheid.
May 2015 bring Peace and freedom, this freedom means refugees finally being allowed to return home. A freedom  that means that the Palestinian people can move around without having to hide from checkpoints or walk around walls. A freedom that means not being discriminated against, not being denieid passes. A freedom that  means having a functioning economy, that has not been stolen by the occupier, that has seen it taking  over the Palestinians tourism, agriculture, industries, land and natural resources. A freedom that does not see friends and relatives killed or homes demolished.
From the rivers to the sea I hope Palestine will be free, we should all  keep asking for justice and dignity for today's generation of Palestinians and the next ones to come, but we should  also remember that freedom is never given voluntarily by the oppressor it must be demanded by the oppressed. This freedom must be allowed to prevail, as it did in South Africa, I strongly  believe that the arc of the universe is bent towards, this goal, even when at times, it does not seem to look this way. This is one of my dearest goals.
Posted by teifidancer at 10:00