In defence of freedom of speech, tyrants of the world unite. 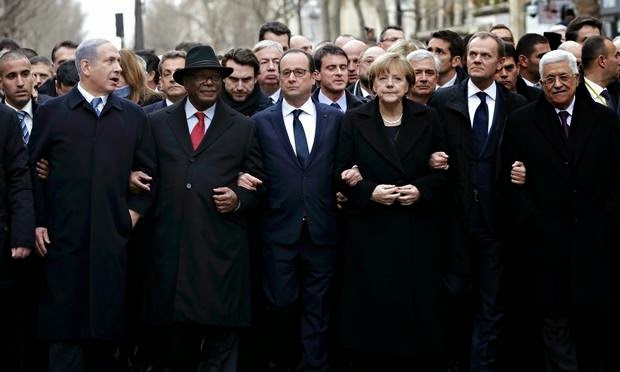 Following recent posts,  I am reminded that the ability to be mocked, or mock yourself is a cornerstone of our humanity,  so it was funny to see at the weekend, a rogues gallery of 40 world leaders, perpetrators of  imperialist wars, colonial occupiers, feudal despots and serial jailers of  inconvenient journalists, gathered together in defence of freedom.
So today I remind you of what has been done in the name of the leading marchers,who seemed to  be as they walked to be spreading hypocricy in all its many directions.
So we have Prime Minister Rajoy of Spain, whose government has just passed  a new gag law placing historic restriction  on the right of protest in Spain, who was responsible  for 16 lawyers of Basque political prisoners being arrested, and 11 Anarchists arrested merely for their beliefs.
Next comes  Foreign Minister Lavrov  of Russia, who last year jailed a journalist for "insulting a government servant."
Then we get Foreign Minister Shoukry of Egypt who has detained Al Zazeera staff and the Journalist Shawken for around 500 days.
Along comes King Abdullah of Jordan  - who last year sentenced a Palestinian  journalist to  15 years in prison with hard labour.
Followed nearby by Prime Minister Davutegbu of Turkey, which  imprisons more journalists than any country in the world.
Oh lest not forget Prime Minister Netanyahu of Israel,  whose force was responsible for killing 17 journalists in Gaza, last year, then their is Foreign Minister Lamamra , which has detained Abdessami Abdelhai  for 15 months without charge, then Foreign Minister of the United Arab Emirates  who in 2013 held a journalist incommunicado  for a month. According to Human Rights Watch and Amnesty International, freedom of speech is severely restricted here, Amnesty saying that more than 100 peaceful activists and government critics have been detained since 2011.
Prime Minister Jomaa  of Tunisia - jailed blogger Yassine Ayan for 3 years for 'defaming the army'.
Next we get the Prime Ministers of Georgia and Bulgaria both of whom  have a record  of attacking and beating journalists.
Still with me, next their is the Attorney General of  the U.S where police in Ferguson have already detained and assaulted Washington post reporters, lest us forget Guantanamo, and the wars of division that have been fostered in America's name, and guess how many times the U.S has bombed Al -Jazeera.
Prime Minister Samaras of Greece - who  riot police beat and injured two journalists recently.
The Secretary General of Nato, he really had to join in didn't he, an organisation who are yet to be held to account for  deliberately bombing and killing 16 Serbian journalists in 1999 bombing of Bedgrade, an organisation intent on warmongering too, and spreading fear.
President Keita of Mali, where journalists are routinely expelled  for covering human rights abuses.
Foreign Minister of Bahrain - here's the 2nd biggest jailor of journalists   in the world per capita ( they also torture them).
Sheikh Mohammed Ben Homad Ben Kalifa Al Thani of Qata, which jailed a man for 15 years for writing the Jasmine poem.
Palestinan President Mahmoud Abbas  who had several journalists jailed for insulting him in 2013.
Prime Minister Cera of Slovenia, which sentenced a blogger to 6 months in prison for defamation in 2013.
Prime Minister Kenny of Ireland, where blasphemy is considered a criminal offence.
Prime Minister Kopaaz of Poland  , raided a magazine  to seize recordings  that were embarrassing for the ruling party.
Prime Minister Orban of Hungary - the autocrat who  Amnesty International  recently said - " has put an end to the free press in Hungary.
Last but no means least we have our very  own Prime Minister Cameron of the UK, where authorities destroyed documents obtained  by the Guardian and threatened prosecution, who as I type wants to reintroduce 'internal exile' a hallmark of the worlds most oppressive regimes, yet more  civil liberties stripped  by the Tory regime.
Yes my mind truly boggles at times, here we have  predators of press freedom, mingling with terrorists and other suppressors of freedom, taking part in a rally against terrorism, in support of freedom of speech in what must amount as an example of shameless political opportunism, in a cynical photo op, that seemed to suggest that they were leading the million people  gathered. Freedom lives, so above are a list of people we can continue to seek out to criticise, hypocrites all, enemies of the poor and oppressed every single one of them, we would be fools if we ignored these simple facts, we carry on then, pointing the finger at those that richly deserve the piss being taken out of them.
So in this time,let us   remember the hundreds of journalists targeted and silenced.
The above so called defenders of free speech, should continue to be mocked and scorned, because this is what  freedom is for, so this is why  today  my pen  pours scorn on theses powerful  yet corrupt  leaders of privilege, let our freedom of expression and thoughts continue to seed,and rebel against all, those that seek to rule us with tyranny and  oppression, and speak up for the powerless.