The Death of fascist Benito Mussolini 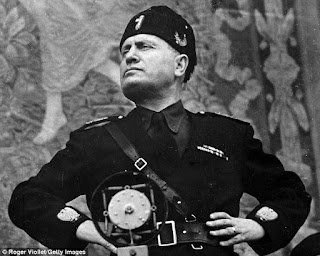 The death of Benito Mussolini, the deposed Italian fascist dictator, occurred on 28 April 1945 in the final days of World War11  in Europe, when he was summarily executed by Italian partisans in the small  village of Guilino di Mezegra in northern Italy.
Born July 29,1883, in Dovia di Predappio. he was an intelligent and inquisitive from an early age. In fact, he set out to be a teacher but soon decided that career wasn't for him. Still, he voraciously read the works of great European philosophers like Immanuel Kant, Georges Sorel, Benedict de Spinoza, Peter Kropotkin, Friedrich Nietzsche, and Karl Marx,
Mussolini had initially been a member of the Socialist Party in 1900 and had begun to attract wide admiration. In speeches and articles he was extreme and violent, urging revolution at any cost, but he was also well spoken. Mussolini held several posts as editor and labor leader until he emerged in the 1912 Socialist Party Congress. He became editor of the party's daily paper, Avanti, at the age of twenty-nine. His powerful writing injected excitement into the Socialist ranks. In a party that had accomplished little in recent years, his youth and his intense nature was an advantage. He called for revolution at a time when revolutionary feelings were sweeping the country.
However in March 1919 Mussolini founded another movement , the nationalist Fasci di Combattimento, named after the Italian peasant revolutionaries, or ' Fighting Bands,' from the 19th century. Commonly  known as the Fascist Party, Mussolini's new right-wing organization advocated Italian nationalism, had black shirts for uniforms, and launched a program of terrorism and intimidation against it's leftist opponents, it won the favor of the Italian youth, and Mussolini waited for events to favor him.
The elections in 1921 sent him to Parliament at the head of thirty-five Fascist deputies; the third assembly of his movement gave birth to a national party, the National Fascist Party, with more than 250 thousand followers and Mussolini as its uncontested leader. In October 1922 Mussolini successfully marched into Rome, Italy. He now enjoyed the support of key groups (industry, farmers, military, and church), whose members accepted Mussolini's solution to their problems: organize middle-class youth, control workers harshly, and set up a tough central government to restore "law and order." Thereafter, Mussolini attacked the workers and spilled their blood over Italy. It was the complete opposite of his early views of socialism.
King Emmanuel 111, who had little faith in Italy's parliamentary government, asked Mussolini to form a new government. Initially, Mussolini was appointed prime minister at the head of a three-member Fascist cabinet, cooperated with the Italian parliament, but aided by his brutal police organization he soon became the effective dictator of Italy, In 1924, a Socialist backlash was suppressed , and in January 1925 a Fascist state was officially proclaimed ,with  Mussolini as 11 Duce, or 'The Leader.'
Once in power, Mussolini took steps to remain there. He set general elections, but they were fixed to always provide him with an absolute majority in Parliament.   He suspended civil liberties, destroyed all opposition, left wing parties were suppressed  and in 1929 imposed an open dictatorship ( absolute rule), At the same time Mussolini also carried out an extensive public-works programme and the fall in unemployment made him a popular figure in Italy.
In 1928 John Heartfield  created The Face of Fascism  a montage that dealt with the rule of Benito Mussolini which spread all over Europe with tremendous force. "A skull-like face of Mussolini is eloquently surrounded by his corrupt backers and his dead victims". 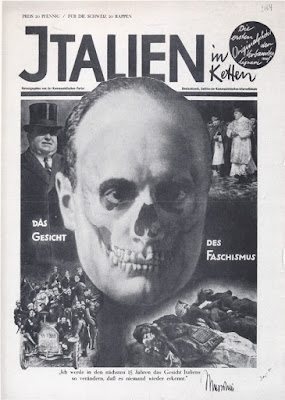