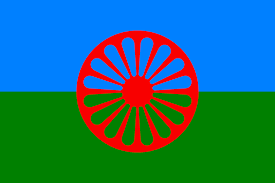 Today I celebrate International Roma Day., celebrating and recognising, the rich history, culture, language of their communities.International Roma Day was officially declared in 1990 in Poland, during the fourth World Romani Congress in honour of the first major international meeting of Roma representatives, 7-12 of April, 1971 in London.
My solidarity goes out to all Roma people worldwide who are still experiencing  massive inequality and huge amounts of racism,  discrimination and exclusion state sponsored  and otherwise.
Romani people have suffered  persecution throughout their history, having left Northern India/Pakisan around one thousand years ago. In the ensuring centuries they have spread across many countries across thee globe. Europe, North and South America, Russia, China and the Middle East. Some were nomadic people. Others tried to settle but were met with hostility and either abandoned their identities or became nomadic like their brothers and sisters. What remained however and strong, was that on the move or in settlements, was a tight knit community, but still faced ongoing discrimination and persecution.
Lest not forget,that though official figures do not exactly exist, it is is estimated that between 220,000 and 500,000 Romani and Sinti,from Central Europe were killed in the 1930s and 1940s. the Nazis  killing about 25 percent of Europe's entire Roma (a.k.a. Gypsy) population, accounting for half their total population at  the time. This genocide, known in the Romani language, as Porajimas which can translate as “destruction.” It's remembered as the worst event in their peoples' history. Other Romani people in the Balkans prefer to use the term 'samudaripen,' translating as “mass killing,” but there's still no general consensus in the community regarding how to call this tragedy, sometimes even borrowing the word 'holokausto.'
Roma persecution by the Nazi regime began in 1933 and during the 1936 Olympic Games, the Roma and Sinti were forcibly relocated to a camp on the outskirts and were not allowed to leave unless they had a job. Their property was confiscated and sold; they were never compensated. Between 1933 and 1945, more than 400,000 people were forcibly sterilised by the Nazis, including thousands of Roma and Sinti, In the late 1930s, the first deportations of Roma to concentration camps began. While the yellow star worn by the Jewish victims of the Holocaust is best known, the Roma had their own symbols, brown or black triangles, symbolising their ethnicity and their inherent ‘anti-social’ status.
Today it is important to remember that many Roma continue to suffer from systemic discrimination and violence. Discriminatory treatment and stereotyping prevents Roma from fully participating in political, social and economic life around the world. Roma experience  exclusion, violence and repression in the countries where they live. They are forced to live in conditions that are degrading to human beings. They are discriminated against in the labour market because of their ethnic identity.
Rather than seek to address the discrimination faced by these marginalised communities, it appears the government plans to punish them further by introducing legislation which includes proposals to criminalise trespass and the act of setting up an ‘unauthorised’ encampment. The Police Powers and Protections Bill, which, seeks to implement a 2019 Conservative Party Manifesto pledge to “give the police new powers to arrest and seize the property and vehicles of trespassers who set up unauthorised encampment” and to ‘make intentional trespass a criminal offence.’ Trespass is currently governed by civil law and upgrading trespass to a criminal offence would have significant ramifications for GRT communities in particular, and must be opposed...
Aa I hope you share this day of remembrance, that continues to cast a light on the human rights issues and violations of so many, lets also show a gratitude to a beautiful community that so enriches our lives and continue to reject the negative stereotypes and bias that impacts and  keep on defending their rights and way of life.
Posted by teifidancer at 17:02