The Death of Blair Peach 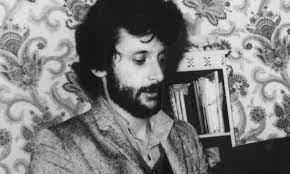 Blair Peach  died from a broken skull , as a result of  being struck on the head  by a truncheon wielding policeman from the Special Patrol Group during a demonstration  on the 23rd of April 1979.
Clement Blair Peach was born in New Zealand on the 25th of March 1946.  He studied at Victoria University of Wellington and was for a time co-editor of the Argot literary magazine with his flatmates Dennis List and David Rutherford. He worked as a fireman and as a hospital orderly in New Zealand before moving to London in 1969 and started working as a teacher at  the Phoenix School in Bow, Tower Hamlets, East London, a special needs school.
Peach was no stranger to radicalism and protest; he was a member of the Socialist Worker’s Party, as well as the Socialist Teacher’s Association and the East London Teacher’s Association, both within the National Union of Teachers. A committed anti-fascist.In 1974 he was acquitted of a charge of threatening behaviour after he challenged a publican who was refusing to serve black customers. He was also involved in campaigns against far-right and neo-Nazi groups; he was well known for leading a successful campaign to close a National Front building in the middle of the Bangladeshi community around Brick Lane. He was also arrested in April 1978, outside a public meeting held by the NF in an East London school. The police had arrested a fellow demonstrator, who was black and female. Peach instinctively placed himself between the woman and the arresting officer and said, “Leave her alone, she has not done anything.” He was arrested, and pleaded not guilty but was convicted, receiving a fine of £50.
Peach was elected President of the East London Teachers Association in 1978. Twice that year he was attacked by supporters of the National Front as he cycled home from teaching at the Phoenix School, and he suffered black eyes, bruising and cuts. According to the East Ender newspaper, “Doctors fear permanent damage may have been done to one of his eyes. His finger has been bitten through to the bone shredding the nerves.” Even before 23 April 1979, Peach was putting his body on the line in the cause of the struggle against fascism.
On St. George’s Day 1979, the fascist National Front held a meeting in Southall Town Hall. The Front had almost no supporters in the area, but was hoping to gain publicity by bulldozing its way through the heavily Asian district of outer London.  a neighbourhood which, especially since the fatal stabbing of 18-year-old Gurdip Singh Chaddar in Jun 1976, had been the target of increasingly violent attacks not only by National Front supporters but also by the local police. Nearly 3000 of the latter were deployed that day to ensure the fascists could hold a rally, 94 of the on horseback.The Anti-Nazi League held a counter demonstration outside the Town Hall. Peach was one of 3000 people to attend,
When the National Front meeting began, members of the Special Patrol Group were among police who tried to clear the area of demonstrators. The SPG was a specialist group that had gained notoriety following the Red Lion square disorders in 1974 at which student Kevin Gately was killed by a blow to the head by an unidentified assailant.
The demonstration turned violent;700 protestors were arrested, paramedics were denied proper access to tend to police-battered bystanders, the People Unite community centre run by the reggae band  Misty In Roots which was being used as a medical centre to treat wounded anti racists  was raided. Dozens of eye-witnesses complained that police officers aimed their batons at the heads of doctors, nurses and solicitors who had sheltered there. The band's manager Clarence Baker beaten into a coma from which he only emerged months later.
According to 14 eye-witnesses who gave evidence to the subsequent inquest, Peach sustained a blow to the head from a weapon by a police officer at the junction of Beachcroft Avenue and Orchard Avenue, as he tried to get away from the demonstration. that left him staggering in to a nearby house. The impression is sometimes given that Blair Peach died instantly in the street but in fact he was still conscious though very dazed and finding it hard to speak when the ambulance arrived a quarter of an hour after the injury.  There was no blood or external trauma but it’s clear that he was suffering from a swelling in the brain, what’s termed an extra-dural haematoma. Blair Peach died in an operating theatre at the New Ealing District Hospital at 12.10am. He was only 33 years old. At least three other anti fascist protesters were hit so hard to the head that their skulls were fractured.
Peach’s death struck a chord amongst the communities he had stood up for, and across the city as a whole. A few days after his death, 10000 people marched past the spot where he was fatally injured. His funeral was delayed by several months, until the 13th of June, but that was also attended by 10,000 people. The night before his funeral, 8000 Sikhs went to see his body at the Dominion Theatre in Southall.
In the aftermath of Peach's murder, protesters were everywhere, flyposting, speaking, organising, discussing the lessons. The police were around, in very large numbers, but they did not dare to stop people from organising. It was almost as if the police were shamed by the enormity of what they had done. June 1979 also saw a 2,000-strong first Black people’s march against state harassment through central London.
Police investigated themselves in the aftermath of Blair Peach's death and identified  6 cops, 1 of whom administered  the fatal blow. No one has ever been charged.. 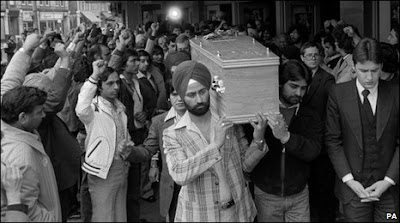 Blair Peach was an ordinary man,
Blair Peach he took a simple stand,
Against the fascists and their wicked plans,
So them beat him till him life was done.

Blair Peach was not an English man,
Him come from New Zealand,
Now they kill him and him dead and gone,
But his memory lingers on.

Oh ye people of England,
Great injustices are committed upon this land,
How long will you permit them, to carry on?
Is England becoming a fascist state?
The answer lies at your own gate,
And in the answer lies your fate.
Peach was a deeply private person, more comfortable in political rather than literary circles, No more than one or two of the writer mentioned above can have known that in his youth Blair Peach had been a poet himself. At the University of Wellington he had helped edit a literary magazine Argot, Against the untimely horror of his untimely death perhaps a tint satisfaction can be found in the way h has ben remembered since by the people of Southall as a man who fought alongside them, and by his fellow writers.
It is sad though  that  battles which were fought against state-sanctioned violence and far-right racism are still the battles being fought today, and we should not forget that Blair Peach wasn’t the first person nor the last to be killed by the  police, since his murder Cynthia Jarrett,( whose death during a police raid prompted the notorious Broadwater Farm disturbances in 1985)  Mark Duggan, Ian Tomlinson, Jean Charles de Menezes; are some other people who have  had the misfortune of being famous because they were killed by the Metropolitan Police. The fight for justice goes on, as does Blair Peach's legacy who  believed in the inclusion of everyone no matter what race, religion or educational ability. As was the case over 40 years ago, a principled democratic debate about police powers and methods is vital. We must also continue to  confront and resist the forces of fascism and racism everywhere and continue to defend the right to protest.without any reservation..
Posted by teifidancer at 11:37