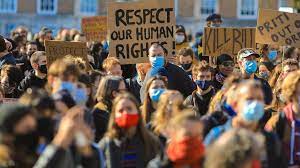 Ghost ships of memory, good to renew
Some think of the great reset and conspiracy,
Forget about the ages of  timeless struggle
Peoples constant fight against forces that cudgel.
Conscious people rallying together, very visible
Not afraid to defend the right to protest,
In our darkest hours, delivering defiance
Standing up for rights,against injustice.
Carrying  forward opposition,with considerable hunger
Speaking truth to power that tries to obscure,
Roaring loud  not to be cowed into silence
Against media and political manipulation.
While  establishment tries to maintains its malfeasance
Creating dominant discourse that excludes dissidence,
Leaving many feeling isolated, marginalised and powerless
By protesting we challenge their corrupt moral agenda.
It's a duty, an act of  faith, a moral obligation
Freedom of speech so great, the world long been wrong,
These are times for anger, because fascism still growing
A real cause for concern as history keeps repeating.
Life is a battleground, a road of constant endeavour
Through windows of emptiness and despair keep calling,
Never  forget to find hope in seeds of solidarity
Continue to dance among the firmament of belief.
In beautiful actions of awakening, keep resisting
Let naughtiness run riot, criss-crossing many obstacles
Stay safe, be careful, wherever you may be treading
Keep promoting democratic values so enriching,
When calls go unheard, unreceived, ignored
Fill air all around with inexhaustible reason,
Take your time to explain your cause with devotion
Remain empowered, releasing anger and defiance.
To avoid Orwellian Police state that will brutalize
There is the need to demonstrate, with no compromise
Between the tears and pain that continue to fall
Look forward to a time when justice forever rains.
Posted by teifidancer at 15:01