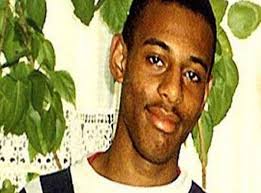 Today is the third annual Stephen Lawrence Day, named for the black teenager  and loving son who was murdered in a racist attack on the same day in 1993.
The story of Stephen Lawrence is deeply tragic one and, sadly, one of far too many.Stephen  was born and grew up in Greenwich  south-east London, where he lived with his parents Neville and Doreen, his brother Stuart and sister Georgina.
Like most young people, he juggled an active social life, school work, family commitments, and part-time employment. But he also had ambitions to use his talent for maths, art, and design to become an architect, and wanted to have a positive impact on his community.
Tragically, his dream of becoming an architect was never realised. On 22 April 1993, at the age of just 18, Stephen was murdered in an unprovoked racist attack. He didn’t know his killers and his killers didn’t know him.
The killing of Stephen Lawrence by a group of young men simply because he was Black was a horrific crime, but the failure to correctly pursue the killers because of the Metropolitan Police’s own racism was an appalling crime in its own right
Undercover officers spied on his family’s campaign for justice. Stephen’s parents and his friend, Duwayne Brooks, who was with him on the night he died, were all reported on by undercover police and are all classed as core participants in the public inquiry.
Incompetence, alleged corruption and racism in the police meant that it took nearly 20 years to convict two of his killers,Gary Dobson and David Norris, while the remaining three Neil Acourt, Jamie Acourt and Luke Knight have never been brought to justice.
They should not be allowed to rest easy.Their sentences should be long, despite the fact that they were juvenille at the time, they have shown no remorse, consistently lied and flaunted and paraded their arrogance. Shown themselves as the cowardly racists they are.
Sadly the ugly reality of racist hatred still lingers. It needs to be crushed and condemned at all times. Only then can we really move on.A public inquiry into the handling of Stephen’s case was held in 1998, leading to the publication of the Macpherson Report, a major breakthrough in recognising institutional racism and taking steps to tackle it.
The findings of the Stephen Lawrence Inquiry led to changes in the British Race Relations Act and an opening up of discussion and attitudes around race and colour. Of course, what we know from discussions in 2020 and 2021 is that the inequalities that are created by racism have not been removed since the recommendations were given in the 1999 report.
Ever since, a major struggle has taken place to defend the findings of the Macpherson report and a host of other reports which have found overwhelming evidence of institutional racism and made recommendations to record and combat it.
The Undercover Policing Inquiry was set up in 2015 to look at the activities of two shadowy police units after condemnation of undercover tactics.
A public outcry was sparked when it was revealed that women had been tricked into sexual relationships with undercover officers and that police spies had used the identities of dead children without their families’ permission.
Family justice campaigns were spied upon, and there are claims that some officers were arrested or prosecuted for crimes under fake identities, leading to alleged miscarriages of justice for their co-defendants.
The Government's CRED report was the latest attempt by those wishing to deny institutional racism, and therefore deepen it. It is vital to the legacy of those who have fought racism for decades that we defeat it.
The report has been overwhelmingly rejected, including by a UN panel who concluded that it "repackages racist tropes and stereotypes into fact, twisting data and misapplying statistics and studies into conclusory findings and ad hominem attacks on people of African descent. "
Stephen Lawrence's death left a wake of shock and grief, but also a strong appetite for profound change - something activists have worked towards for decades.
Stephen Lawrence Day was created by the Stephen Lawrence Foundation as a celebration of his life and legacy. It exists “to inspire a more equal, inclusive society, and to foster opportunities for marginalised young people in the UK”.
The Stephen Lawrence Foundation has launched a drive to commemorate the teen and push for meaningful action every year on April 22.
And there are several ways for willing participants to get involved.
The Stephen Lawrence Foundation hopes to inspire people to actively influence their community and make positive changes.
Whether this is by making the right choices or getting involved in local projects, action can help young people create their ideal community.
Organisers also hope to provide voices to those who might not always feel they can speak up.
While Stephen Lawrences's death ignited discussions about institutional racism and hate crime, there is still work to do. For  truly transformational change, racism must be rooted out in every aspect of our society.We must  continue to promote anti racism and our call for a better life for all through the ending of inequality, inequity, systemic racism and injustice.
Stephen Lawrence Day is about the part we can all play in creating a better society; a society that treats everyone with fairness and respect, a society in which everyone can flourish.
One way to get involved is by understanding anti-racism and the circumstances surrounding Stephen's murder with resources.
Several organisations have compiled guides on combating racism and hatred, including the Stephen Lawrence Foundation.

Those who want to learn a little more from the foundation's leaders can watch educational webinars.The foundation has scheduled three so far to take place over April 22 and 23 on their YouTube channel.
'Justice for Stephen is about all of us, every one of us, in society having justice ,' Baroness Doreen Lawrence