The Legacy of the 1981 Brixton Riots 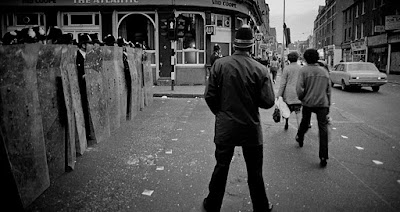 On Saturday 11th April 1981, Brixton was set ablaze as hundreds of local youth fought with the Metropolitan Police. The country was in recession, unemployment amongst African Caribbean  members of the community was high, and the quality of housing was poor. In the week preceding the Brixton Riots, Operation Swamp 81, saw over 1,000 people ( mainly  from the  young black community) being stopped and searched adding to the increased  frustration of the local people. Tensions were high.
A house fire in January 1981, in nearby New Cross, saw 13 black youths killed.https://teifidancer-teifidancer.blogspot.com/2017/01/linton-kwesi-johnson-new-crass-massahkah.html Some believed that the fire, far from an accident, had been the result of a racially motivated arson attack and anger quickly spread at the unwillingness of the police to investigate the possibility.
Then on April 10 , rumours of police brutality against a black man resulted in an  angry crowd confronting police for a few hours before the disturbances  were contained.
But what happened next in a battle between  police and residents was to become one of the most significant outbreaks of civil disorder in 20th Century London. Police continued operating their hated 'sus' laws,  where in order to stop someone, police only needed suspicion.  At the time the police were exempt  from the Race Relations Act, and many people targeted  were from  the ethnic community, which  led to accusations of racial prejudice. It left many people feeling humiliated, with a sense of indignity and rage, many young men, had also been savagely beaten by the police. Police were said to have mounted a campaign of harassment against the black community in south London that one former officer claims amounted to "torture".There was a general feeling of bitterness and resentment, with many believing that the Conservative Thatcher Government were using the police as its military wing , and that they were under siege.
After arrests were made the following night tensions rose again, igniting violence which spread across  the streets. The streets  of Brixton became a battle zone. After police arrived in  full riot gear, people started gathering to throw makeshift petrol bombs and set light to police cars. For three days, rioters - predominately young, black men - fought police, attacked buildings and set fire to vehicles. 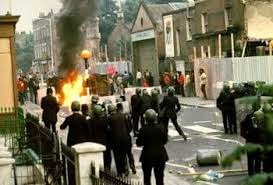 By the  time hostilities  had ended,  over 360  people had been injured, 80 of whom were bystanders,,  28 premises burned and another 177 damaged and looted. The police arrested 82 people. To the largely Afro-Caribbean demonstrators it was a “show of strength” against police brutality, deep rooted social and economic problems ,high unemployment and institutionalised racism, and perilous  tensions exacerbated by discriminatory tactics by the police.
Brixton would act like a catalyst for copycat riots in Liverpool, Manchester, Birmingham, Leicester, Leeds and other parts of inner-city London, and after the riots a police enquiry was held under Lord Scarman , his report issued on November 25 1981 placed the Brixton Riots into the context of racial disadvantage faced by young blacks. It also blamed the police for escalating the tensions and called on law enforcement agencies to in the future consult and co-operate with the Brixton community. But 4 years on 25 September 1985, police shot Mrs Cherry Groce in error while looking for a man in connection with a robbery. The incident fuelled a new wave of anger in the community, many of whom felt that the police had not learnt the lessons of 1981.
Rioters barricaded Brixton Road, setting fire to the cars. Shops in Brixton were firebombed and looted. One person was killed and 50 people injured. Over 200 people were arrested. Mrs Groce spent two years in hospital and was permanently disabled as a result of the shooting.
There have been many many miscarriages of justice since. the death of reggae singer Smiley Culture for instance and Roger Sylvester, a mentally ill thirty-year-old beaten to death by the police in 1999 while under hospital restraint (he had been detained for apparently wanting to kick down his own front door), lest we forget Mikey Powell who die in police custody in 2003 and the flawed investigation into the racist killing of Stephen Lawrence. Many Black lives too are still in danger in police custody.
40 years later Brixton, seems a transformed place, marked by gentrification,now teeming with boutique food stalls, starbucks, and restaurants and new bespoke housing developments.
But there are many lessons to be learned. Many of these new developments are simply out reach financially for most locals. Police racism continues, as does unemployment and poverty. And in spite of a government drive to bring more people into work, unemployment among ethnic minority communities is still twice the general rate.
Capitalist society still suffers from a sickness that breeds ,the big criminals of the land get rich and fat, get rewarded for their crimes (ie the bankers) whilst the poorer members of our communities are stigmatised, getting poorer, punished because of the greedy. And though Margaret Thatcher is long dead, her polices and ideas that helped ignite these past troubles still lingers on through our current incumbents.
Young Black men in London are 19 times more likely to be stopped and searched than the general population, a study of official data by University College London shows, with claims that trut and confidence in police ae under serious strain.The pandemic has also really highlighted the divide between rich and poor in Brixton in terms of digital access, housing space, and access to space study and work. Also the recent publication of the government;s controversial and divisive race report, also denied the existence of institutional racism in the UK, which whatever it says is still very real.You only have to look at how the Windrush generation were treated to see evidence of this, and the hostile environment for immigrants that the Government has created while stoking the flames of Britains  culture war  .https://www.theguardian.com/commentisfree/2021/apr/02/culture-war-government-race-report
It is significant that 40 years later, we have another right wing Tory  government that doesn't care about poor or marginalised communities or that Black lives matter. With the rise of the far right being racist is seen as acceptable.  Unrest can easily be fermented, when conditions on the streets are ignored.The new Police Bill also fermenting much anger.  Riots that have happened since, like those seen in Brixton do not happen without a reason. We have to renew our commitment to dismantling all the structures of racism more than ever.
Hiatus - Insurrection (feat. Linton Kwesi Johnson)

Guns of Brixton - The Clash