Using fear and the threat of insecurity to manipulate the people, corporate media, in bed with governnment, over the years having become the mouthpiece of government control, unleashes a barrage of propoganda, to arouse the population with a false sense of security that justifies miltary action. This way, debate is silenced and dissent is dissapeared on the airwawaves as once again the corporate media, the gatekeepers of infomation, allow us only to see and hear the point of view they want us to incorporate into our psyche. Voices of reason and of intelligence are ignored, banished from imparting thoughts of wisdom, thus making it virtually impossible for the population to ever know there are other options beside the horror of war.

With corporate anchors, journalists, reporters, commentators and executives pushing into our homes an exclusive pro-war, jingoist viewpoint, blitzkrieging us with their propoganda-laced images and opinion, over months of constant threats of fear and insecurity, denying the public from ever seeing or hearing fruits and realities, it therefore becomes rather easy, with a  population addicted to television viewing, to mobilise a nation for war. With the marriage of government and corporate power, truth dissapears just as much as falsly prospers. With both entities profiting from the spoils of war, it is in each other's best interests to work together to disseminate the seeds that will inarioubly spawn the rebirth of a dominant war culture.

It is designed to manipulate and control at once, transformeing the population into a sedentary  herd of sheeple who never question what is told them. Over the years millions of civilians have used this most dangerous drug to escape lives of frustration, unhappiness, deperation, depression and loneliness, never realising that with every hour they watch, with every show they are glued to, with every channel they surf their minds are turned to mush becomming conduits of ignorance, molded into muscles in deperate need of gossip and sensationism, no longer thinking for itself.

The Establishment has perfected its machination of propoganda, creating the realities it wants into society, forming whatever truth that will be of the greatest benefit, not to society, but to itself. Whatever reality it wants to create and disseminate is quickly absorbed by a population eager to feed of the mammary glands of television. The Establishment, the corporate world and government have for years told us how and what to think, how to act, who to obey and where to follow, condemning our minds to obedience, our lives to conformism and silent acquiescence. 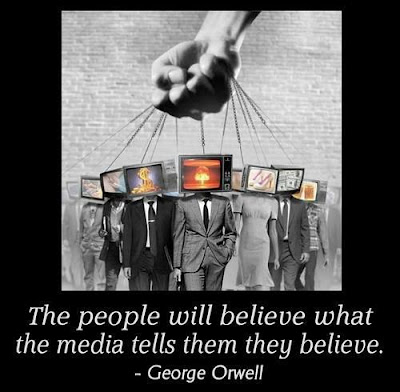 It doesn't have to be like this though, change the media, change the people. There are many alternative media sources growing all around. Blogging for instance, facebook, yes twitter. Still not taken completely seriously, it is ostraciced and marginalised, but increasingly people are looking for new ways of seeing , and for spreading their messages of  social justice and ideas that they control themselves. Unfortuately the internet is not free yet either, with many forces out their attempting forms of censorship.I personally use rather too much of both. But what would happen if we all simultaneously turned of our  televisions, wow that would be amazing, We would become the news, make it, rather than be mere spectators, that are ignored daily anyway. Oh, what time is now on?

Disposable Heroes of Hypocricy - Television the Drug of the Nation.