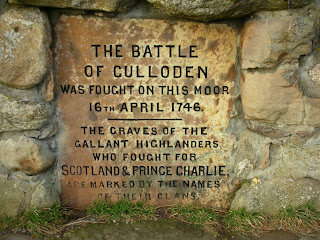 On 16th April 1746, the Duke of Cumberland wiped up the rump of Bonnie Prince Charlie's army of Stuart hopefuls. Charles Edward Stuart was trying to win the British throne for his father James, son of James 11, and tried to capitalise on the understrength English army. He had made it as far south as Derby, but because of lack of support he was forced to turn round, and when defeat came he was back in the Highlands, at Culloden Moor near Inverness. The Battle of Culloden was the last full-scale land battle to be fought in Britain. It has since been remembered in many songs and verse.
It is also a place cited as one of the various origins of the Curse of Scotland, a tag given to the nine of diamonds http://www.rampantscotland.com/know/blknow_curse.htm.
A memorial has been held on the Sunday nearest the 16th since the 1920's, on the cairn at the site of the Battle.
Many thousands were butchered as they ran, died in prison, executed or died in transport to the colonies Subsequently the culture and language of the Gaels was brutally suppressed, closely followed by  the Scottish clearances. So Culloden has become a site of pilgrimage and lamentation, functioning as a place to try and decode the Scottish identity and the Scottish nation. For the Scots  it has marked more than two centuries of tragedy and loss. It has become a landscape of loss and mourning. It speaks too of the larger Scottish diaspora, and has become a focus  for the collective  memory of the Scots.
Many Scots still shed a tear, for the noble sacrifice of the many Jacobite who fell.
In recent years the Scots soul has been rekindled and reawakenened, long may it soar. 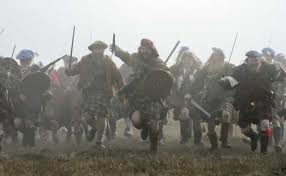 Culloden (clip from 1964 docudrama , The Battle Of Culloden)

The Ghosts of Culloden - Isla Grant