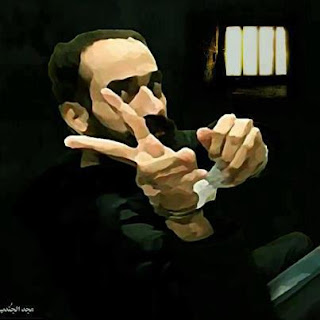 Israelis:
I am Samer Issawi on hunger strike for eight consecutive months, laying in one of your hospitals called Kaplan. On my body is a medical devise connected to a surveillance room operating 24 hours a day. My heartbeats are slow and quiet and may stop at any minute, and everybody, doctors, officials and intelligence officers are waiting for my swtback and my loss of life.

I chose to write to you: intellectuals, writers, lawyers and journalist associations, and civil society activists. I invite you to visit me, to see a skeleton tied to his hospital bed, and around him three exhausted jailers. Sometimes they have their appetizing food and drinks around me.
The jailers watch my suffering, my loss of weight and my gradual melting. They often look at thei watches, asking themselves in surprise; how does this damaged body have an excess of time to live after its time?

I'm looking for an intellectual who is through shadowboxing, or talking to his face in mirrors. I want him to stare into my face and observe my coma, to wipe the gunpowder off his  pen, and from his mind the sound of bullets, he will then see my features carved deep in his eyes, I'll see him and he'll see me, I'jj see him nervous about the questions of the future, and he'll see me, a ghost that stays with him and doesn't leave.

You may receive instructions to write a romantic story about me, and you could do that easily after removing my humanity from me, you will watch a creature with nothing but a ribcage, breathing and choking with hunger, losing consciousness oncein a while.

And, after your cold silence, Mine will be a literary or media story that you add to your curricula, and when your students grow up they will believe that the Palestinian dies of hunger in front of Gilad's Israel sword, and you would then rejoice in this funerary ritual and your cultural and moral superiority.

I am Samer Issawi the young "Arboush" man according to your military terms, the Jerusalemite, whom you arrested without charge, except for leaving Jerusalem to the suburbs of Jerusalem. I, whom will be tried twice for a charge without charge, because it is the military that rules in your country, and the intelligence apparatus that decides, and all other componements of Israeli society ever have to do is sit in a trench and hide in the fort that keeps what is called a purity of identity - to avoid the explosion of my suspicious bones.

I have not heard one of you interfere to stop the loud wail of death, as if everyone of you has turned into gravediggers, and everyone wears his military suit: the judge, the writer, the intellectual, the journalist, the merchant, the academic, and the poet. And I cannot believe that a whole society was turned into guards over my death and my life, or guardians over settlers whose chase after my dreams and my trees.

I will die satisfied. I do not accept to be deported out of my homeland. I do not accept your courts and your arbitrary rule. If you had passed over in Easter to my country and destroyed it in the names of God of an ancient time, you will not Passover to my elegant soul which has declared disobedience. It has healed and flew and celebrated all the time that you lack. Maybe then you will understand that awareness of freedom is stronger than the awareness of deatrh.
Do not listen to those generals and those dusty myths, for the defeated will not remain defeated, and the victor will not remain a victor. History isn't only measured by battles, massacres and prisons, but by peace with the Other and the self.

Listen to my voice, the voice of our time and yours! Liberate yourselves of the excess of greedy power! Do not remain prisoners of miliary camps and the iron doors that have shut your minds! I am not waiting for a jailer to release me, I'm waitng for you to be released from my memory.
Posted by teifidancer at 12:25