Poem for the Hillsborough disaster by Carol Ann Duffy 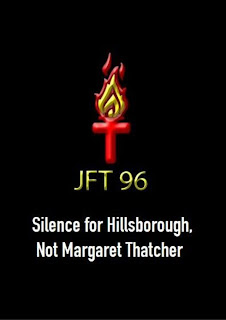 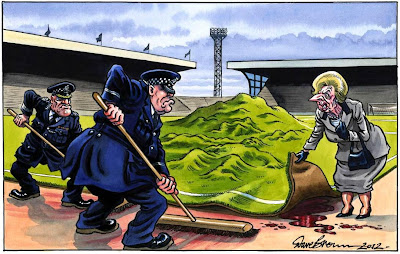 The 96 Liverpool supporters who lost their lives at Hillsborough, 24 years ago were remembered in the anniversary memorial service yesterday. A memorial was unveiled at Old Haymarket and an antique clock was installed at Liverpool Town hall and set at 15.06 the time of the tragedy.
Families will gather at Anfield later today for an annual memorial service , a minutes silence will be held, with the names of the 96 fans who died read out, and a candle lit in memory of each victim.
The truth of what people have been saying for 24 years is finally emerging with the undeniable truth now recovered and revealed , and the fight for justice is reaching a conclusion.
Here is a touching poem by Carol Ann Duffy about the Hillsborough disater.

nor the Liver Birds, mute in their stone spell;

or the Mersey, though seagulls waild, cursed, overhead,

in no language for the slandered dead...

not the raw, red throat of the Kop, keening,

or the cops' words censored of meaning;

not the clock, slow handclapping the coroner's deadline,

or the memo to Thatcher, or the tabloid headline...

but fathers told of their daughters; the names of sons

on the lips of their mothers like prayers; lost ones

not a matter of footbal, but of life.

Over this great city, light after dark;

truth, the sweet silver song of the lark.