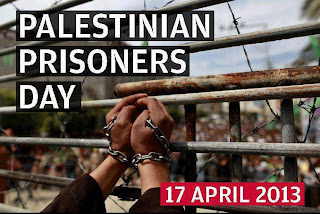 Today marks Palestinian Prisoners Day, a day that also serves to mark the ongoing perserverence of the Palestinian peoples relentless struggle for peace, justice, freedom and dignity. It is also used to
to illustrate the Israeli army's excessive and often lethal use of force against peaceful and unarmed demonstrators throughout the West Bank and Gaza .
One Palestinian prisoner Samer Isaawi  who I written about previously has been on hunger strike in an Israeli detention centre for 270 days, one of the longest hunger strikers in history. He has refused Israeli offers to be exiled to Gaza and other UN countries, firmly insisting that he will be either released to his home in Jerusalem or starve to death. 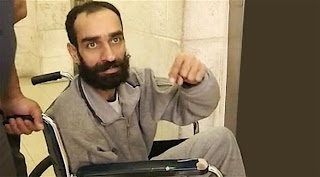 Palestinian Prisoner Day was founded to remind the world of the thousands of Palestinian political prisoners imprisoned in Israeli prisons or detention centers without charge or trial for extensive periods of time. The number of Palestinian detainess increases as Israeli occupying forces continue to wage campaigns of arbitrary arrests and detentions against thousands of Palestinian prisoners. Palestinian prisoners in Israeli jails continue to be subject to wide-ranging violations of their rights
and dignity.
There are5,000 Palestinian poluitical prisoners incarcenated in 27 Israeli prisons, jails, detention centres and interrogation centres.
The numbers of Palestinian women detained has also increased,which amounts to 14 with a Lisa Jarbouni bring the longest serving prisoner, so far held for 11 years out of her 20 year sentence. There are 235 child prisoners and 200 administrative detainess.
Investigations have revealed that prisoners are regularly subject to cruel, inhuman or degrading treatment, including poor detention conditions, in violation of Israel's obligations under international human rights and humanitarian law.
This is why I support the Palestinian prisoners, and continue  to support the international communities efforts to ensure the immediate and effective measures to ensure that Israel releases all unlawfully detaned prisoners, and ensures that conditions of arrest are consistent with international human rights and humanitarian law. 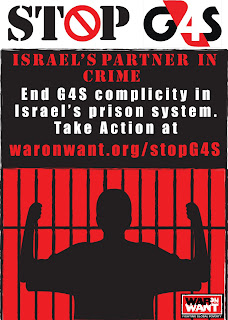