The Witch is dead 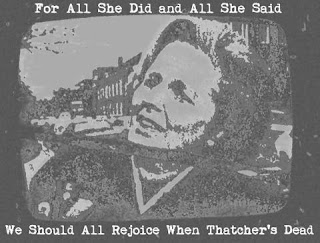 Woke up earlier feeling a bit depressed, had an atos form to fill out, but then I noticed an unusual amount of people smiling in the street. What was going on I asked, haven't you heard the news Margaret Thatcher has died. What , suddenly it felt like the first time I had taken ecstacy, a rush of emotion that I had not felt for ages.
Some people would say that I should not be rejoicing in her death, nothing compares to the sadness that many people have felt that she was ever alive.
I deplore the way the mainstream media  is treating the life and legacy of Margaret Thatcher. To many people in this country, Thatcher was one of the most divisive figures to have emerged. She created misery and suffering for millions, while selling of  that which belonged to the people. Her legacy being carried on by the Con Dems vicious cruel policies. Her legacy continues in nasty economic policies, that have made the rich richer and the poor, poorer, with the slashing in this present time of essential services and the dismantling of the welfare state. Her legacy forever rotten to the core, friends of dictators etc etc.
Across the country there will be many people dancing and celebrating her demise. I have already drunk a toast.
http://www.facebook.com/groups/TheWitchisDeadParty/

Maggie Thatcher may be dead but the rest of her Nasty Party and corrupt Government are very much alive. Please sign this, on behalf of those people who have been hardest hit by their deliberate destructive policies.

These songs and this post is dedicated to all those who were blighted by her,and those who stood up against her in angry defiance.

John McCullough - I will dance on your grave Mrs Thatcher

Margaret Thatcher may be dead but the rest of her Nasty Party  very much alive.