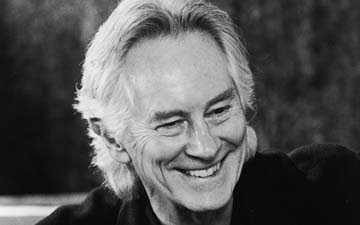 Michael McClure, the fantastic poet playwright turns 83 today, so hats of. Best known for his participation in San Francisco famous Six Gallery Poetry reading where Allen Ginsberg first publicly read Howl and his friendship with the band  The Doors, he was to become a prominent figure in the Beat movement, writing poetry and plays. His 1965 production The Beard faced obscenity charges, but were subsequently dismissed.
His writing reflect his Bhuddist practice and his appreciation of the natural world using elements of typographical expression, with an exquisite sensibility. I like his work a lot, so thanks Michael, and happy birthday.

THAT GOVERNMENT IS BEST WHICH GOVERNS LEAST.
Let me be free of ligaments and tendencies
to change myself into a shape
that's less than spirit.
LET ME BE A WOLF,
a caterpillar, a salmon,
or
an
OTTER
sailing in the silver water
beneath the rosy sky.
Were I a moth or condor
you'd see me fly!
I love this meat of which I'm made!
I dive in it to find the simplest vital shape!

WHAT'S LIBERTY WHEN ONE CLASS STARVES
ANOTHER?
Posted by teifidancer at 11:30