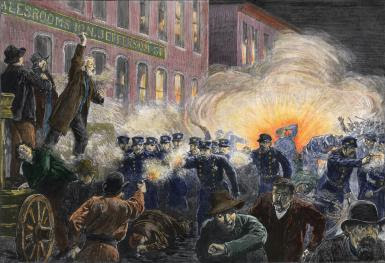 The Haymarket Riot (also known as the “Haymarket Incident” and “Haymarket Affair”) occurred on May 4, 1886, when a labor protest rally near Chicago’s Haymarket Square turned into a riot after someone threw a bomb at police. The rally at Haymarket Square was organized by labor radicals to protest the killing and wounding of several workers by the Chicago  police during a strike the day before at the McCormick Reaper Work. The demonstrators were calling for greater power and economic security, standing against capitalism and  calling for an eight hour day.
Anarchist leader August Spies, a German immigrant, was among the many people who were angered by the police’s reaction to the McCormick strike. He had been giving a speech to strikers a short distance from the factory, and had witnessed police open fire on workers. Spies rushed to the offices of the Arbeiter-Zeitung, an anarchist newspaper he edited, and wrote a leaflet denouncing the incident. He headlined the flier “Workingmen, To Arms.” That evening, as word of the McCormick killings spread, another group of Chicago anarchists planned an outdoor rally to protest police brutality. They scheduled the gathering for the following evening at Haymarket Square, a large space on Desplaines Street.
At the May 4th meeting  a number of radical and anarchist speakers addressed a crowd of over 3,000 people. August Spies opened the rally by climbing atop a hay wagon and giving a speech on the “good, honest, law-abiding, church-going citizens” who had been attacked at the McCormick factory. He was followed by Albert Parsons, a former Confederate soldier turned radical anarchist. Chicago Mayor Carter Harrison was even in attendance to ensure the protest was peaceful.  And the meeting  was peaceful but the mood became  more confrontational when the police tried to disperse the crowd. As  scuffles broke out, someone who has never been positively identified threw a bomb at police lines. (some have since claimed was an agent provocateur in the pay of the authorities to try and stoke up division.) The bomb landed and exploded unleashing shrapnel. One officer was killed and several were wounded. The police responded by drawing their weapons and firing into the panicked crowd.  Seven  policemen  were killed, most likely from police bullets fired in the chaos, not from the bomb itself,and at least one civilian died as a result of the violence that day, and an untold number of other people were injured. 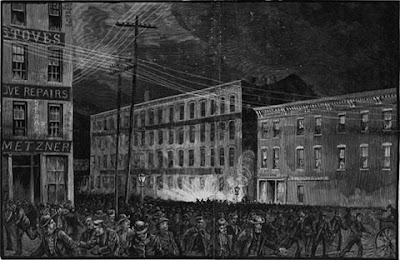 The aftermath created  widespread hysteria, further repression and a national wave of xenophobia, as hundreds of foreign born radicals and labor leaders were rounded up in Chicago and elsewhere in what  is seen as the first great political witch hunt and frame up trial, used as an excuse to  crack gown on  the entire labor movement. Inevitably anarchists were rounded up, and treated to what today would be termed rough justice,
A grand jury eventually indicted 31 suspected  labor radicals in connection with the bombing, and eight anarchist leaders from the revolutionary syndicalist tradition were convicted of instigating violence and conspiring to commit murder. in a controversial trial, despite lack of evidence and no connection to the actual bomb. The judge, Judge Gary, gave one of the most shameful performances that this country has ever seen, and it has  seen plenty from its judges. He helped choose the jury,to make sure it would convict. He questioned men who stated they had already formed an opinion about the case, had definite prejudices against Anarchists, Socialists and all radicals, were not certain they could render an impartial verdict--and ruled that they were not disqualified! He said from the bench that :-"Anarchist,Socialists and Communists were as pernicious and unjustifiable as horse thieves" and, finally, in charging the jury, that even though the state had not proved that any of the eight men had actually thrown the bomb , they were guilty of a conspiracy to commit murder .He imposed the death sentence on seven of the men, and the eighth was sentenced to 15 years in prison.In what is seen as a racist show trial, which like all kangaroo courts is seen as a travesty of justice. Many of the accused not even present when the incident took place.
These men have since  become known as the Haymarket Martyrs, Albert Spies, Albert Parsons, Adolph Fischer and George Engel who were  tried and convicted and executed  for their political beliefs, not for their actions  on May 3th, who still occupy an honored history in the place of  class struggle in the United States and internationally whose sacrifice is remembered every year on May 1st International Workers Day, whose deaths sparked protests around the world.

"These are my ideas. They constitute a part of myself. I cannot divest myself of them, nor
would I if I could. And if you think that one can crush out these ideas that are gaining ground
more and more every day; if you can crush them  out by sending us to the gallows;if you would once more have people suffer the penalty of death because they have dared to tell the truth -
and I defy you to show that we have told a lie-
if death is the penalty for proclaiming the truth, then I will proudly and defiantly pay the costly price."

Engel, Fischer, Parsons and Spies were taken to the gallows in white robes and hoods. They sang the Marsellaise, then the anthem of the international revolutionary movement. According to witnesses , in the moments before the men were hanged .Spies shouted, " The time will come when our silence, will be more powerful than the voices you strangle today!" Witnesses reported that the condemned men did not die immediately when they dropped, but strangled to death slowly, a sight which left many speakers visibly shaken.
The Haymarket affair is now generally considered significant as the origin of the International May Day observances for workers,  when in July 1889, a delegate from the American Federation of Labor recommended at a Labor conference in Paris that May 1  be set aside as International Labour Day in memory of the Haymarket martyrs and the injustice metered out to them, and has become a powerful reminder of the international struggle for workers rights, that I for one try not to forget.
Rather than suppressing labor and radical movements the events of 1886 and the execution of the Chicago Anarchists,  actually mobilised and galvanised a new generation of radicals and revolutionaries. Emma Goldman a young immigrant at the time later pointed to the Haymarket affair as her political birth. Lucy Parsons widow of Albert Parsons , called up on the poor to direct their anger at those responsible - the rich. In 1938 , fifty-two years after the Haymarket riot , workdays in the United States were legally made eight hours by the Fair Labor Standards Act. It is up to us to keep the memory of the  Haymarket martyrs alive. to learn the lessons of their struggle so that they did not die in vain, acting as enduring symbols of labors struggles for justice. 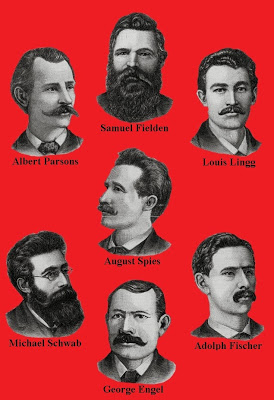 Following the Haymarket affair, trial and executions, August Spies, Adolph Fischer, George Engel, Lous Lingg and Albert Parsons were buried at the German Waldheim Cemetery (later merged with Forest Home Cemetery).
The Pioneer Aid and Support Association organized a subscription for a funeral monument. In 1893, the Haymarket Martyrs' Monument by sculptor Albert Weinhert was raised at Waldheim. It consists of a 16-foot-high granite shaft capped by a carved triangular stone. There is a two step base, which also supports a monumental figure of a woman standing over the body of a fallen worker, both in bronze. It was dedicated on June 25, 1893, after a march from Chicago. The inscription on the steps read, "1887," the year of the executions. Also, there is a quote attributed to Spies, recorded just before his execution by hanging: "The day will come when our silence will be more powerful than the voices you are throttling today." On the back of the monument are listed the names of the men. On the top of the monument, a bronze plaque contains text of the pardon later issued by Illinois governor John Peter Altgeld]
The dedication ceremony was attended by 8000, with union flags and the American flag draped on the monument. European unions and American organizations sent flowers to be placed.  Many activists and labor leaders were subsequently buried nearby. Michael Schwab and Oscar Neebe were also buried at Waldheim when they died. Samuel Fielden is the only Haymarket defendant who is not buried at Forest Home. For years, annual commemorations were held.
Since the 1970s, the Illinois Labor History Society has held the deed to the monument and been responsible for its maintenance and restoration. It conducts monthly guided tours of Forest Home Cemetery from May through October.

In October 2016, volunteers and scientists dug near the base of the monument, where they recovered a time capsule that had been buried under the cornerstone on November 6, 1892, during the monument's construction. The time capsule, which is 24 inches (62 cm) tall and 12 inches (30 cm) wide, was made of stone or concrete and capped in marble. According to a list in the records of the Pioneer Aid and Support Association, the time capsule contained newspaper articles, letters to and from the Haymarket defendants, and photographs of the men and their families. It also held trial documents, essays, and letters and testimonials from a number of labor unions and fraternal organizations. In addition, it may contain a bust of Albert Spies.

We should remember that when workers celebrate May First, they are commemorating a struggle for the 8-hour day that began in America and the American labor leaders who paid for that cause with their lives. The Haymarket martyrs were bold pioneer fighters for a better society and they paid  so with their lives for their devotion and clear-sightedness. Although they sleep all these years in Waldheim Cemetery, their work was  not in vain and they are not forgotten. Named for Voltaire by her freethinker father, Voltairine de Cleyre (1866-1912) endured an impoverished midwestern childhood before her father converted to Catholicism and sent her to a Canadian convent, where she spent her teenage years. This experience, which she later invariably referred to as nightmarish, left her a militant atheist, and for many years she was one of the American freethought movement’s star lecturers. She was briefly a socialist after encountering Clarence Darrow in 1887, but the example of the Haymarket martyrs soon inspired her to take up their cause. She is buried near their graves in Waldheim.

Light upon Waldheim! And the earth is gray;
A bitter wind is driving from the north;
The stone is cold, and strange cold whispers say:
What do ye here with Death? Go forth! Go forth!”
Is this thy word, O Mother, with stern eyes,
Crowning thy dead with stone-caressing touch?
May we not weep o’er him that martyred lies,
Slain in our name, for that he loved us much?
May we not linger till the day is broad?
Nay, none are stirring in this stinging dawn —
None but poor wretches that make no moan to God:
What use are these, O thou with dagger drawn?
“Go forth, go forth! Stand not to weep for these,
Till, weakened with your weeping, like the snow
Ye melt, dissolving in a coward peace!”
Light upon Waldheim! Brother, let us go!