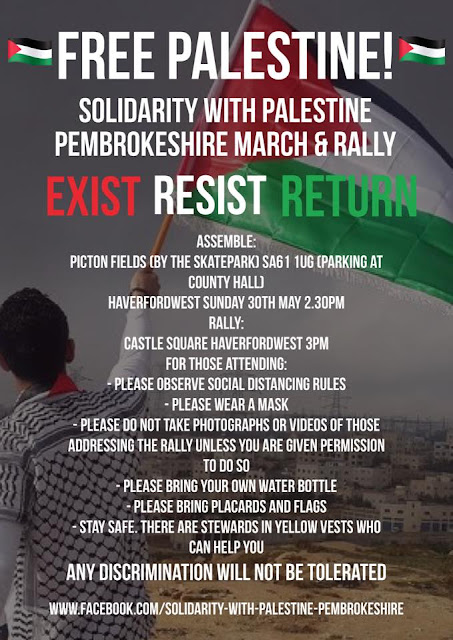 A Free Palestine protest is taking place in Haverfordwest, tomorrow, it has been  called for by Palestine activists, the Pembrokeshire Muslim community and trade unionists after describing how Britain;s arms deals with Israel have contributed to the deaths of Palestinians.

It follows a number of Free Palestine  protests held across the world recently in solidarity with the people of Palestine after renewed violence in Israel and Palestine in the last month. The event will take place following a cease-fire that went into effect on  Friday the 21st of May that was brokered by Egypt. The ceasefire came after an 11-day military offensive in the Gaza Strip considered the worst violence in the region since 2014. The halt to hostilities comes after more than 230 Palestinians — including over 60 children — had been killed in Israeli airstrikes.

The Israeli airstrikes left thousands of Gazans without a place to live, after a week of sustained conflict and critics of Israel say its occupation of Gaza and the West Bank needs to end..

Lets not forget that Gaza is besieged by Israel by land, sea and air on a daily basis. It's inhabitants the vast majority of whom are refugees are trapped in an area of land just 60 kilometres long and 9.5 kilometres wide, in what many see as an open air prison..

In a recent report,Independent human rights experts have also highlighted the vast asymmetry of of power between Gaza and Israel and called on  the International Criminal Court to investigate the attack on civilians and "gross violations of human rights"

Increasingly people are questioning an occupation by a powerful military state, armed and supported by the West, against an impoverished, stateless and displaced people. For over 70 years, Israel has subjected Palestinians to systematic human rights abuses, severe discrimination, and deadly military force. A fourth generation of Palestinian children are being brought up in refugee camps, in chronic poverty, denied the right to return to their family homes. Over a million Palestinians suffer discrimination over access to public services, land and employment. Israel’s siege of Gaza has condemned its 1.9 million inhabitants to poverty and psychological violence. The construction of the apartheid wall, the military closure of the Jordan Valley, and the annexation of East Jerusalem are creating an irreversible reality of permanent occupation.

As a fragile ceasefire currently holds  the Israeli occupation continues ,and daily keeps inflicting on the Palestinian people, by virtue of their identity to misery. In certain areas, the deprivations the Palestinians face are so severe that they amount to the crimes against humanity of apartheid and persecution.

Governments around the world, including the UK government, have enabled Israel to carry out this oppression. Israel’s oppressive rule over the Palestinian people relies on the support of countries and companies which back  Israel through diplomatic support, trade and investment.

Many people know this is wrong and are now standing for justice, believing we have a responsibility to protect human rights. Reasons too why I am supporting tomorrow's protest and the Palestinian people’s struggle for justice. Our solidarity with the people of Gaza and Palestine  is more necessary now than ever.

The protest in Haverfordwest will assemble at Picton Fields on Sunday, May 30, and march to Castle Square.

Organisers have emphasised that it is a peaceful protest and people who attend must remain vigilant and keep to socially distance guidelines.

A spokesperson for the rally said: "The newly formed group, Solidarity with Palestine Pembrokeshire, supported by Palestine activists, the Pembrokeshire Muslim community and trade unionists, have called for a rally for Palestine on Sunday, May 30.

"We will assemble in Picton Fields by the Skatepark at 2.30pm and march to Castle Square for a rally at 3pm.

"This will be a peaceful socially distanced demonstration to show our solidarity with Palestine and Palestinians.

"Please bring your placards and Palestine flags and make some noise."

The protest group go on to say how they think Britain has had a fateful influence on the troubles in the Middle East.

"Britain is complicit in Israel’s murder of Palestinians.

"Arms deals with Israel are certainly lucrative. Britain has licensed over £400 million in arms sales to Israel since 2015, with the real figure certain to be higher. The equipment includes components for assault rifles, drones and warplanes, all used in attacks on Palestinians.

"Britain doesn’t care. It doesn’t apply any “end use” conditions on the deals, meaning that Israel is free to use the equipment however it likes.

"These weapons of war have been used against Palestinian civilians without mercy.

"The world has risen up in it’s millions to demand an end to Israeli terror."

More details about the rally can be found on Facebook.

From the rivers to the sea Palestine will be free, 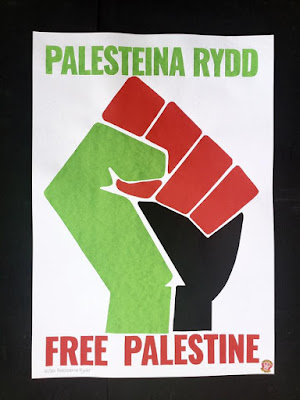