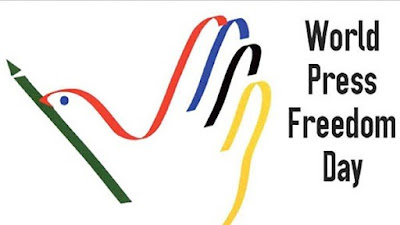 Today World Press Freedom Day  provides an opportunity for people around the world to celebrate the fundamental human right to freedom of expression.  Every day, journalists around the world face the threat of intimidation, censorship, imprisonment and violence, including torture, for their efforts to report on human rights violations.
The press acts as a medium of communication between the government and the people. The free press has a huge responsibility of reporting the truth and shaping people's opinions. Hence to mark the importance of the press, World Press Freedom Day is celebrated every year.
World Press Freedom Day popularly known as World Press Day is one of the calendar events planned, organised and promoted by the United Nations, observed annually on May 3.
The day is celebrated to raise awareness regarding the importance of freedom of the press. The day is reflection among media professionals about issues of press freedom and professional ethics.

"A free press can, of course, be good or bad, but, most certainly without freedom, the press will never be anything but bad." - Albert Camus


May 3 the World Press Freedom Day is a day of support for media and the reporters right to hold the powerful to account, It is also a day of remembrance for those journalists who lost their lives in the pursuit of a story. As per UNESCO, on May 3, national and local celebrations for World Press Freedom Day will take place around the world, which includes online debates and workshops.
World Press Freedom Day was first proclaimed by the UN General Assembly in December 1993, following the recommendation of UNESCO's General Conference. Since then, 3 May, is celebrated as World Press Freedom Day.
As per the official UNESCO Website, the World Press Freedom Day 2021 theme is 'Information as a Public Good'. As per UNESCO, this years theme serves as a call to affirm the importance of cherishing information as a public good and exploring what can be done in the production, distribution and reception of content to strengthen journalism and to advance transparency and empowerment while leaving no one behind. A  theme of great importance as the  Covid-19 pandemic still grips the world and fake news and disinformation  continue to harm health, human rights and democracy alike.
World Press Freedom Day acts as a reminder to governments of the need to respect their commitment to press freedom. That the importance of a free press in a functioning and safe society and serves to commemorate the journalists who have lost their lives in support of free press. In a time when media coverage is prone to fear-mongering and sensationalism, taking the time to appreciate and seek out journalism with integrity has never been more important. Freedom of expression is a fundamental human right  as stated in Article 19 of the Universal Declaration of Human Rights.
The day May 3 also marks the anniversary of Windhoek Declaration.A statement of press freedom principles put together by African journalists in 1991 to promote an independent and pluralistic African press.
Media Worldwide is facing crises on multiple fronts, exacerbated by the COVID19 pandemic.As the death toll mounted amidst an economic crisis of unprecedented proportions, promoting transparent reporting was a global necessity. Yet, several countries stand accused of acting too late in warning the world about the timing and extent of the threat.
Worldwide, the nonpartisan group Reporters Without Borders https://rsf.org/en issued its annual World Press Freedom Index April 20, noting that journalism, which it calls “the main vaccine against the virus of disinformation,” is blocked or seriously impeded in 73 countries and constrained in 59 others. Together, that represents 73% of the 180 countries evaluated. It illustrates the oppression of journalists from North to South and a pandemic in its own right seems to have fomented. Ultimately, the freedom of the press can only be guaranteed by a coordinated global effort, public awareness and a focus on the long-term advantages of a more critical world.
In the midst of the rising pandemic of misinformation - may today remind us of how vital press freedom is in ensuring that people have access to verified, fact-based, and unbiased info, both on or offline. Today, citizens from various countries are voicing their concerns about Press freedom and asking their respective governments to release  imprisoned journalists. People' thoughts today are with journalists who are facing violence and punishment for bringing out the facts..
From Julian Assange to Jamal Khashoggi, Palestinian journalists, and others across the globe who have  continued to struggle for freedom of expression and opinion indifferent to the ongoing attempts at silencing them. This day presents itself as a great opportunity to shed some light on the violations to press freedom faced by journalists and the difficult reality in which they have to carry on their work. Today we pay our  tributes to those who risk their freedom and lives to speak the truth.around the world despite some being harassed, censored, attacked, detained and even murdered in the exercise of their profession..

"Freedom of the Press, if it means anything at all, means the freedom to criticize and oppose." - George Orwell.