The Communards’ Wall, at the Père Lachaise cemetery, Paris. 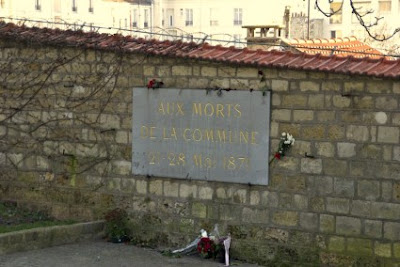 March 18, 2021, marked 150 years since the Paris Commune began.https://teifidancer-teifidancer.blogspot.com/2021/03/150th-anniversary-of-paris-commune.html Despite its short existence and bloody repression, the Commune marked both the history of political ideas and that of revolutions. For 72 days, the communards fought to build a democratic and social republic, organizing elections for its popular commune, initiating radical social measures, discussing political issues in revolutionary clubs, organizing resistance with the National Guard against the Versailles counterrevolution, and more. During the fall of this short-lived revolutionary experience  known as "Bloody Week" (May 21 to 28, 1871), Pere Lachaise Cemetery saw bitter fighting between 200 outnumbered communards  made a final defiant against the troops of the National Assembly's Versailles Army, who secured the area on May 27which ended with the brutal repression of the communards by the French government in Versailles.
The following day 28 May 1871, one-hundred forty-seven federes, combatants of the Paris Commune, were shot, without trial and thrown in an open trench at the foot of a wall in the cemetery. To the  left, the wall became the symbol of the people’s struggle for their liberty and ideals and a reminder  of the ferocity of the government's reprisals. The massacre of the Communards did not put an end to the repression. During the fighting between 20,000 and 35,000 deaths, and more than 43,000 prisoners were taken; afterwards, a military court pronounced about a hundred death sentences, more than 13,000 prison sentences, and close to 4,000 deportations to  New Caledonia.
In keeping with their anti-bourgeois principles the former Communards rejected the grandiosity of monuments land wished only for a simple plaque to mark the wall where the mass executions had taken place. However, fearful of encouraging future insurrection, the authorities attempted to sell off the plots associated with the common grave and banned any mention of the events on individual or collective monuments within the cemetery.  Many leaders of the French Communist Party, especially those involved in the French resistance, are also  buried nearby.
Jules Jouy, a chansonnier from Montmartre wrote:

"Tomb without a cross or chapel, or golden lilies, or sky blue church windows, when the people talk about it, they call it The Wall."
The memory of the Commune remained engraved in the people's memory, especially within the workers’ movement which regenerated itself in a few years time. However  following  the Commune, worker’s protests were not authorized in the streets of Paris until roughly 1910. For anarchists and socialists commemorative ceremonies at the Wall of the Communards assumed the same role that the funerals of opposition figures had during the Restoration. The first march to the Wall took place on 23 May 1880, two months after the partial amnesty for former exiled and deported communards, which came into effect in March 1879, and just before the general amnesty of July 1880. It would be coordinated principally by the (Guesdist) Workers’ Party via its associated relays such as the Socialist Committee for Aid to the Pardoned and Unpardoned (Comité socialiste d’aide aux amnistiés et non-amnistiés) and the Federated Syndical Workers’ Union of Workers of the Seine and the Socialist Press (Union fédérative ouvrière et l’Union syndicale des travailleurs de la Seine et la presse socialiste) which included the publications L’Égalité and Le Prolétaire.: 25,000 people, a symbolic "immortal" red rose in their buttonholes, stood up against police forces. From that time on, this "ascent to the Wall", punctuated French labour force political history. Every year since 1880, the organizations of the French left have held a demonstration in this symbolic place during the last week of May.
The “Wall” has, little by little, become established as the open-air domus ecclesia of a secular and revolutionary left. This secular space has become a new space of sacralization around which those who still believe in and hope for the coming of a more just and egalitarian society and for the completion of the work left unfinished by the revolts of March 1871, come to rest, to reassemble, and to recharge.
Unlike the masculine crowds of street protests that often ended in insurrection, these are respectful family affairs that included women and children. Their orderly nature was later invoked to convince the authorities to grant permits to political parties so that growing worker’s movements might march in the streets of the capital. The modern protest march, now an institution of Parisian life, can be said to have in part been born within the walls of Père Lachaise, where innovations of funerary practice and funerary architecture first allowed for personal and collective commemoration.
Ironically Strangely, Adolphe Theirs is also buried in the cemetery. He was the French President who presided over the execution. and the man most widely associated with the Communes brutal suppression. In May 1971, 100 years after the Commune and just three years after the 1968 protests that had rocked both the capital and the Fifth Republic, commemorators once again lined the streets. Some individuals tried to blow up the tomb of Adolphe Thiers. And in May 2019 thousands of gilet haunes poured out onto the streets and into Père Lachaise  to commemorate the Commune and its stand against the French State. Many leaders of the French Communist Party, especially those involved in the French resistance, are also  buried nearby.

What we ask of the future

What we want from it

Not vengeance
Covering more than  100 acres Père Lachaise is the world's most visited cemetery. Its appeal lies not just in death, but in the fact that it's a brooding aggregation of French culture. Hundreds of celebrities, writers, artists, and musicians are buried there. This is where you come to honor the brilliant minds.
Among those buried in Pere Lachaise are Oscar Wilde,. Edith Piaf, Frederich Chopin, Eugene Delacroix,Amedeo Modigliani, Pissarro,Marcel Proust, Gertrude Stein and Jim Morrison.
A chart bearing prominent names and locations is displayed at the entrance gate. Every headstone tells a story. The cemetery is built on a gently sloping hill side in Paris in the 20th arrondissement on the eastern side of the city. To walk through it is almost to visit the last 200 years of French history. The pathways are cobbled and elegantly maintained. It is like walking along a stretch of peaceful country lanes, a place where time seems to stand still. Vive la Commune. 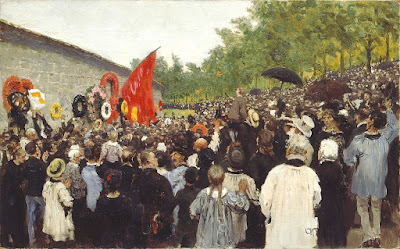 The annual Memorial Meeting Near the Wall of the Communards in the Cemetary of Père Lachaise
Painting by Ilya Repin
Posted by teifidancer at 14:16