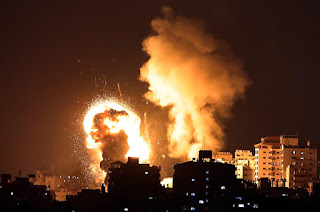 Israel has approved a ceasefire  between Hamas  after a devastating  offensive  on the Gaza Strip. Forced to stop bombarding  Gaza tonight after global condemnation.
At least 232 people were  killed , including 65 children,1,900 wounded. 90,000 displaced according to the UN. 1800 housing units destroyed. 74 government facilities bombed.33 media centres destroyed.6 high rise buildings  leveled.There are no bomb shelters, or bomb sirens in Gaza..
On the 17th May Israel bombed  the office of the Palestinian Children's Relief  Fund in Gaza that  provides free medical care for Palestinian children in need, they've also bombed power plants, water plants, mosques and the roads leading to hospitals, These are war crimes.
While the ceasefire is to be welcomed,it is not enough, it will only stop the bombs temporarily.It doesn't mean those who lost their entire families will  be rectified, The Ceasefire does not mean that this is the end of illegal occupation, colonisation, oppression and ethnic cleansing.This is not a ceasefire.Israel will continue to kill Palestinians by land, sea and air in the coming days, weeks and months as it has done with every other ;ceasefire', Reduced media coverage after the ceasefire does not mean the root cause is resolved,
We cannot return to apathy, we must amplify our voices and must keep on protesting and  supporting Palestinians rights, for freedom, justice and equality for all under Israels apartheid government,and make sure that Israel pays its price for its criminality.
The Ceasefire arrives after President Biden  has incredibly approved s $735 Billion arms sale to Israel. that surely can't be justified. To put it briefly, the Biden administration, like its predecessors, is financing Israels brand of exceptionalism and settler colonial policies, The latests weapons deal is even uglier in the face of the bombing of Gaza because it demonstrates clearly US-Israel collusion against Palestinians..
It is time.for United State , the United Kingdom .and the EU to end their unequivocal support for Israeli aggression and illegal occupation .It is time for Israel to end it's brutal siege and blockade on Gaza the world'd largest ever open air prison.It is time to fully open all of Gaza's crossing. It is time to lift restrictions on imports and exports. It is time for Palestinians in Gaza to have more than 6 hours of electricity a day.It is is time for Israel to end it;s repeated violations of international law; It is time for the Palestinians to be free and safe and practicing all their human tights.
Please support the Palestinians in their quest for Peace and Justice through the boycott, divestment movement (BDS), and you can  also help by getting the following petition to 400K?
https://petition.parliament.uk/petitions/585314
Posted by teifidancer at 00:07