A companion piece to last weeks post,  Atos is a French multinational IT services and consulting corporation currently undertaken work capability tests on behalf of the government, in their role of managers of  the Department of Work and Pensions Work Capability Assessments scheme. Atos has become  a lightning rod for widespread public anger  over their health test, known as the work capability assessment. The test has been critisised  for being crude and inhumane, amid mounting evidence that  hundreds and thousands of vulnerable people  have been wrongly judged to be fit for work and inelligable for government support. Rottenness lays at it's core.
Please consider joining  the many demonstrations that are taking place against this country tomorrow.
I will be attending the following one in Carmarthen.

an old poem of mine updated.

A medical assessment,
that in 30 minutes dismisses
what general practitioners for years believed,
for some of us no human touch,
our claims rejected by remote computers.

In the shadow of these proclamations,
uncertainty lingers,
for the depressed, alienated and the wounded,
cast out into a world of make believe
into a sort of existential deception.

These persistent doubts create teardrops,
shattering lifes, half mended,
out of sight no apologies,
under their judgement, miracles created,
in and out through a one way system,
designed to  make us fail.

We are people not statistics,
not here to serve profits cause,
in unvanquishable number,            *
our spirits and determination remain,
as we remember those lost and killed,
in conditions still dignified with rage.

This trial of illusion,
leads to ill-starred nights,
boxed in corners of despair,
the sustenance of welfare and understanding,
recieved and now stolen,
this malicousness  simply has to stop.

This company profits from immoral agendas,
on behalf of a government, victims paying now ,
for the crimes of the bankers, who have bled us dry,
we are the voiceless but we are not yet invisible,
this process simply not fit for purpose,
Atos's acronym perfect,because they do not give a toss. 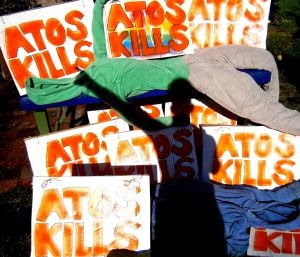