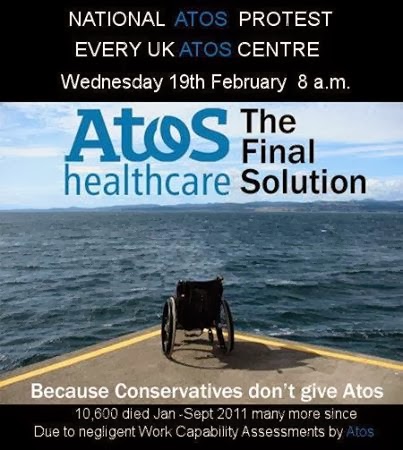 Next week on February 19, protestors will be gathering nationally  outside 144 Atos  centres to  peacefully protest against the inhumane and disgusting treatment of  people receiving emplyment support allowance, and its predecessors incapacity benefit and the severe disablement allowance.
The poor  treatment of  our countries most vulnerable citizens is well documented, so this protest will call for an apology from Ian Duncan Smith and Thiery Breton, Chairman and CEO of ATOS  to the growing number  of people who have sadly taken their own lives due to this government of millionaires  war of austerity on the poor, which has resulted  in changes to  the benefit system.

Lee Robinson 39, who was the first person in whose suicide could be attributed to the government changes.

Shaun Pilkington 58, who was sent a letter saying he was to lose his Employment and Support Allowance, which he got after a long-term illness.

Edward Jacques 47 who took a fatal overdose after his benefit payments were stopped.

Richard Sanderson 44 who stabbed himself in the heart.

Jacqueline Harris  53, oormer nurse, found dead at her home, after taking an overdose of medication after being  pronounced fit for work.

It seems targetting the vulnerable is now this Governments bloodsport of choice,  using an unfair target driven culture, it seems  also that the management of ATOS are pressuring assessors to fail many claimants and deny them the benefits that they depend on and entitled  to, in a heartles, incompassinate manner. Also it seems to me that the Government and Atos are being aided and abetted at the moment by the media, assisting them with a negative portrayal of the sick and disabled, distorting and misrepresenting us. Pitting the poor against one another, while  at the same time  slashing  taxes for banks, corporate giants and the richest people in Britain, the sale of their hypocricy is staggering.
In July 2013, ATOS whistleblower Dr Greg Wood lifted the lid on  the horrible culture that existed within the organisation - carrying out assessments that are simply not fit for purpose, I personally know of people who have not been assessed by humans, but by computer, and just waiting for a decision adds to an already very stressfuli existence, and contributes unessesssary burden.
The Government seems to carry on regardless and like ATOS simply don't give a toss, if ATOS were really doing  their job correctly they would have declared Work and Pensions Secretary Iain Duncan Smith unfit to do the job that he is supposed to be doing. I personally  have been assessed declared fit for work, appealed won,  moved into a support group where I have not seen anyone for over a year, and now have to undertake the whole gruelling process again. G.Ps medical reports are routinely ignored, simply the whole rotting procedure stinks. The scale of anxiety caused is immense.
ATOS's cruel insensitive tratment of vulnerable and ill people is utterly  reprhensible and should not be allowed to continue, the appeal process which many people are winning  is costly and unaffordable.
It is time this despicable company had its contract withdrawn and the Government started to put people before profit, that assesses people in a fair and dignified manner.

Please join me in one of the many demonstations that are taking place across the country and show some solidarity.

Details of where they are taking place can be found here :-

I am based in West Wales, and hope to head over to Carmarthen and attend the event there.