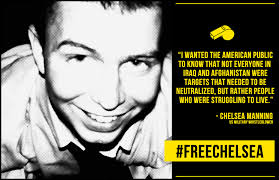 Because of her brave decision to blow the whistle on systematc deception and wrongdoing, Chelsea Manning has been awarded the Sam Adams Award ( named after a C.I.A whistleblower in the Vietnam War) for integrity in Intelligence. Edward Snowden also recieved the same award in an award ceremony held last month.Chelsea was awarded the prize in her absentia, as she is currently incarcentaed in Leavenworth prison.
In her statement accepting the award, Chelsea addressed  the unprecedented secrecy that the  U.S government is involved in. She describes how Washington describes whistleblowers as traitors, coupled with the deteroriation of due process guarantees, unveiling  the heart of the U.S's true principles.

The founders of America- fresh from a war of Independence from King George III - were particularly fearful of concentrating power. James Madison wrote that " the accumulation of all powers, legislative, executive, and judiciary, in the same hands, whether of one, a few, or many, and whether hereditary, self-appointed, or elective, may justly be pronounced the very definition of tyranny."
To address these concerns, the founders of America actively took steps when drafting the Constitution and ratifying a Bill of Rights including protections echoing the Libertarianism of John Locke to ensure that no person be " deprived of life, liberty, or property, without due process of law."
More recently.though, since the rise of the national security apparatus - after a brief hiatus between the fall of the Soviet Union and the attacks on the Pentagon and World Trade Center - the American government has been pursuing an unprecedented amount of secrecy and power consolidation in the Exexcutive branch, under the President and the Cabinet.
When drafting Article III of the American Constitution, the founders were rather leery of accusations of treason, and accorded special protections for those accused of such a capital offense, providing that a person shall be convicted of Treason inless on the Testimony of two Witnesses to the same overt Act, or on Confession in open Court."
For those of you familiar with the American Constitution, you may notice that this provision is under the Article concerning the Judiciary, Article III, and not the Legislative or Executive Articles, I and II respectively. And, historically, when the American government accuses an American of such crime, it has prosecuted them in a federal criminal court.
In a recent Freedom of Information Act case - a seemingly Orwellian "newspeak" name for a statute that actually exempts categories of documents from release to the public - a federal district court judge ruled against the New York Times and the American Civil Liberties Union. The Times and the ACLU argued that the documents regarding the practice of "targetted killing" of American citizens, such as the radical Sunni cleric Anwar Nasser al-Aulaqi were in the public's interest and were withheld improperly.
The government first refused to acknowledge the existence of the documents, but later argued that their release could harm national security and were therefore exempt from disclosure. The court however, felt constrained by the law and concluded that the Government had not violated the FOIA by refusing to turn over the documents sought in in the FOIA requests, and could npt be compelled   to explain in detail the reasons why the Governments actions do not violate the Constitution and the laws of the United States.
However, the judge also wrote candidly about her frustration with her sense that the request implicated serious issues about the limits on the power of the Executive Branch under the Constitution and laws of the United States," and that the Presidential Administration had engaged in public discussion of the legality of targeted killing, even of American citizens, but in cryptic and imprecise ways." In other words, it wasn't that she didn't think that the public didn't have a right to know - it was that she didn't feel that she had the "legal" autority to compel disclosure.
This case, like too many others presents a critical problem that can also be seen in several recent case, including my court martial. For instance I was accuissed by the Executive branch, and particularly the Department of Defense, of aiding the enemy- a treasonable offense covered under Article III of the Constitution.
Grante, I received due proces. I received charges, was arraigned before a miltary judge for trial, and eventually acquitted. But the al-Aulaqi case raises a fundamental question: diod the Amercan government, and particularly the same President and Department. have the power to unilaterally determine my guilt of such an offens, and execute me at the will of the pilot of an Unmanned Aerial Vehicle.
Until documents held by the U.S Department of Justice's Office of Legal Counsel were released after significant political pressure in mid 201, I could not tell you. And, very likely, I do not believe I could speak intelligently of the Administations's policy on "targetted killing" today either.
There is a problem with this level of secrecy, obfuscation, and classification or protective marking, in that they supposedly protect citizens of their nation; yet, it also breeds a unilateralism that the founders feared, and deliberately tried to prevent when drafting the American Constitution. Now, we have a disposition matrix," classified military commissions,and foreign intelligence and surveillance courts-modern star Chamber equivalents.
I am now accepting this award, through my friend, former school peerand former small business partner, Aaron, for the relaese of a video and documents that " sparked a worldwide dialogue about the importance of government accountability for human rights abuses, " it is becoming  increasingly clear to me that the dfangers of withholding documents, legal interpretation, and court jurisprudence from the public that pertain to the right to "life, liberty, and property" of a state's citizen is a fundamental and important to protecting against such human rights abuses.
When the public lacks the ability to access what its government is doing, it ceases to be involved in the governing process. There is a distinct difference between citizens, in which people are entitled to rights and privileges protected by and from the state, and subjects, in which people are placed under the absolute authority and control of the state. In essenc, this is the difference between tyranny and freedom. To echo a maxim from Milton and Foes Friedman: a society that puts secrecy - in the sense of state secrecy - ahead of transparency and accountability will end up neither secure nor free.