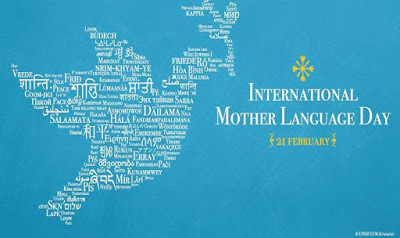 Happy International Mother Language Day.
The day was proclaimed by the United Nations Educational, Scientific and Cultural Organisation (UNESCO) in 1999. International Mother Language Day aims to promote the preservation and protection of all languages used around the world.The day is also observed to promote linguistic and cultural diversity, multilingualism  and bring awareness to languages on the path to extinction.
The date represents the day in 1952 when students demonstrating for recognition of their language, Bangla, as one of the two national languages of the then Pakistan, were shot and killed by police.
International Mother Language Day provides a grand exposure for the recognition, protection, and spread of lesser-used and threatened languages to reassert themselves in their struggle for language rights, to promote linguistic and cultural diversity and multilingualism.
This year’s theme is “Indigenous languages matter for development, peace building and reconciliation”.Languages, with their complex implications for identity, communication, social integration, education and development are of strategic importance for people.Languages are the most powerful instruments of preserving and developing our tangible and intangible heritage. All moves to promote the dissemination of mother tongues will serve not only to encourage linguistic diversity and multilingual education but also to develop fuller awareness of linguistic and cultural traditions throughout the world and to inspire solidarity based on understanding, tolerance and dialogue.
But linguistic diversity is increasingly threatened as more and more languages  disappear. One language disappears on average every two weeks, taking with it an entire cultural and intellectual heritage.According to the United Nations, 43 percent of the estimated 6,000 world languages are  “endangered.” Thousands of local languages used as the daily means of expression are absent from education systems, the media, publishing and the public domain in general because of state policies.
We learn better in our mother tongue when it is taught in school  But this is not the case of all minority languages. 476 million of world’s illiterate people speak minority languages and live in countries where children are mostly not taught in their mother language
Tashi Wangchuck's Tibetan Language advocacy was peaceful, non-political and conducted  through official channels. He was  neverthcless arrested by the Chineses authorities and sentenced to five years in prison.
https://freetibet.org/news-media/na/china-bars-lawyer-jailed-tibetan-activist-visiting
In Turkey, because of repressive assimilationist policies, many Kurds have suffered language loss. The so-called democratization process has proven to be elusive, cosmetic, inconsequential and peripheral. It is not surprising that despite all the misleading rhetoric on language reform in Turkey, Kurdish has not been given its denied status, and the demand for the basic right to education in the mother tongue is still controversial and rejected.
In Iran, draconian restrictions are being used against using the language in official institutional and educational settings. Government directives issued periodically reinforce a repressive policy that has turned schoolyards into a battlefield where administrative personnel and teachers have been requisitioned to watch over and eavesdrop on Kurdish students to ensure that no one speaks “the local dialect.”
Similarly, Kurdish ethnic and linguistic identity in Syria has been denied and brutally repressed. To this day, Kurds are treated as outsiders and foreigners. These entrenched state language ideologies, in short, have made a stateless nation subjected to harsh measures of linguicide and ethnocide.
These exclusionary and discriminatory practices have detrimental social and educational implications for Kurdish children who find it more difficult to thrive endemically.
When a language disappears, it takes with it an entire cultural and intellectual heritage so does the world’s rich tapestry of cultural diversity..As we celebrate the 70 th anniversary of the Universal Declaration of Human Rights remember it enshrines the right to freedom of opinion and expression and promotes the preservation and protection of all languages used by peoples of the world. Not only does the recognition of the value of one’s mother tongue help develop a sense of pride in it, it can help promote an attitude of mind towards other cultures and tongues, as being due a reciprocal respect.
International Mother Language Day is also a good opportunity to remind ourselves that children of migrants and Indigenous people have an international right to speak, grow up with, and celebrate their own heritage languages, wherever they reside. Languages enriches society, economic mobility and at end of the day is what makes us human.
On #MotherLanguageDay, let’s stand together to make sure that #IndigenousLanguages are preserved! https://on.unesco.org/2Brk2wU
Posted by teifidancer at 14:46