Tommy Robinson and his supporters show their true colours 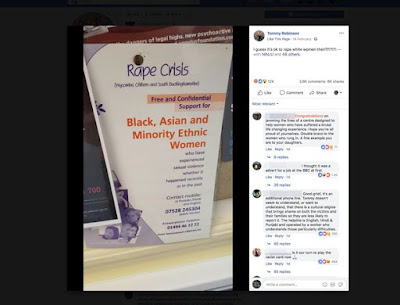 Just when it might have been thought that Stephen Yaxley Lennon, who styles himself Tommy Robinson could not get any lower, he then outdoes himself with the support of his devoted followers.
He and his supporters tried to jam up the phone line to a Rape Crisis  centre for BAME people whose volunteers speak several languages, because he took offence to a poster not mentioning white people.
On on his Facebook page, which has more than a million followers  posted a picture of a leaflet produced by Rape Crisis Wycombe, Chiltern and South Bucks, urging black, Asian and minority ethnic women who have experienced sexual violence to come forward if they needed support.
The leaflet also includes a contact mobile number where callers can speak to someone in Punjabi, Hindi or English.
Alongside the photo of the leaflet, the post was captioned: "I guess it's ok to rape white women then??!?!?!"
Rape Crisis said since the post was shared on Facebook yesterday, the centre has received a "significant volume of abusive phone calls, messages and emails, many of which are of an overtly racist nature.
Some of Robinson's one million Facebook followers jumped on the post, calling the leaflet "horrendous", "discriminative" and "out of order".
One commenter said: "That sums up what our country has become and what we need to stop."
Another added: "Think we ALL need to phone the numbers advertised & put in a racist complaint !!!" 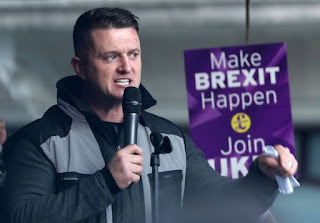 Rape Crisis has informed the police of the torrent of abuse they have received and slammed the post for "disrupting much-needed service provision for victims and survivors of sexual violence and abuse of all ethnicities and backgrounds".
In a statement, the charity said: "Rape Crisis (Wycombe, Chiltern and South Bucks) recognises that some groups of women who have survived sexual violence and abuse can face additional barriers to accessing services, including related to language and to the fear and/or past or current experience of racism and racial discrimination.
"As part of its commitment to accessibility and inclusion, it therefore offers a specialist service for black, Asian and minority ethnic women aimed at overcoming some of these barriers.
"An image of a leaflet advertising this specialist BAME service was recently posted on social media with a misleading caption.
"Since then, Rape Crisis (Wycombe, Chiltern and South Bucks) has received a significant volume of abusive phone calls, messages and emails, many of which are of an overtly racist nature, and the police have been informed.
"These activities have disrupted much-needed service provision for victims and survivors of sexual violence and abuse of all ethnicities and backgrounds.
"Rape Crisis England & Wales supports Rape Crisis (Wycombe, Chiltern and South Bucks) and all its member Rape Crisis Centres in the provision of fully inclusive, accessible services, including specialist work with specific groups of under-served, minoritised or marginalised victims and survivors."
Robinson  has since been slammed for wilfully encouraging abuse of the charity.
Antony Sheehan wrote: "Congratulations on jamming the lines of a centre designed to help women who have suffered a brutal life changing experience. Hope you’re all proud of yourselves".
Barbara Treen wrote: "The organisation is presumably trying to reach out to a group of women who have experienced sexual assault but are known to not normally seek support."
Robinson has not removed the  post from his facebook account. He and his supporters sought to take it upon themelves to try and destroy a helpline to help rape victims. What kind of profound ignorance and violent irrational hatred drives a man and hus supporters  to attempt to prevent  a  raped woman  from trying  to find and seek help, because of the colour of her skin. What vile disgusting despicable cowards they all are each and everyone of them. As if these women do not have enough to contend with. How can Robinson still manage to garner  support or any form of respect is simply beyond my comprehension .