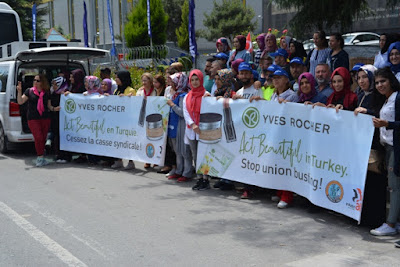 French cosmetic and skin care giant Yves Rocher who makes a whopping 2 billion Euros a year  has come under fire after132 workers at its Turkish subsidiary Kozan Kosmetik  in the Turkish industrial district of Gebze, near İstanbul, mostly women ,got so sick and tired of the appalling conditions -- they joined a union.The management then fired them.Yves Rocher’s built its brand on women’s empowerment. But it’s walking all over one of the most fundamental rights of its female workforce,   despite the Fact that the Right to unionise is recognised both by the Turkish Constitution and the Internationally Recognised Conventions of the International Labour Organisation. .
The sacked employees  mainly female workers have  been picketing the factory for almost 300 days since May 15  with  bosses erecting barbed wire fencing to prevent them from speaking to other workers.
Yves Rocher bought a 51 per cent stake in Flormar in 2012, in a deal worth estimated at $150 million (£116m). Flormar is the number one make-up brand in Turkey with a 21 per cent market share. Its goods are exported to around 60 countries, with global sales worth around $100m (£77m) per year.
However, the workers at the Flormar factory complain of low pay and poor safety conditions, with bosses demanding that they work extra hours for no more than the minimum wage.
The company went to court to challenge a union certificate issued by the Ministry of Labour, exploiting loopholes in the law to block union recognition.
Flormar bosses started targeting workers for their trade union activities in April, when they sacked 14 members of Petrol-Is.
By mid-May, a total of 132 union members had been dismissed. Many have been campaigning under the slogan “Act beautiful, stop union-busting,” subverting the motto of Yves Rocher, which has tried to distance itself from responsibility for the dispute.
soL HD has shot  the following  documentary video, “Beauty is resisting”, with English and French subtitles, dedicated to the struggle of the resisting workers.


As the video shows, the Flormar workers, were fired one by one, including many of them who had worked for the company day and night for 14 years, simply for seeking  their labour rights.
Social media users from Turkey and around the globe have since started to share soL News’ video to show their solidarity with the resisting workers.The video sharing has turned into a mass social media campaign with those supporting  them popularizing the video with hashtags such as #ActBeautiful (in Flormar-in Turkey) and #STOPUnionBusting. Social media users criticizing French Yves Rocher and its Turkish trademark Flormar for their anti-labour and anti-trade union practices  that they have imposed upon the workers
.One worker employed as a subcontractor, who did not wish to be named, explained: “They asked about my partner’s job and if I had taken part in May Day protests or was a member of a political party.
“They said being in a union was a big problem for them and told us that, if we spoke to those resisting, we would be sacked.”
Pinar Koca, who was sacked the day after she joined the union, said: “We are defending not only our own rights but also the rights of our friends in the factory.”
She called on women to “boycott cosmetic products by Flormar and Yves Rocher and support our action.”
Sacked Flomrar worker Elif Ulsu remains confident of victory, saying: “We will not give up. I believe women are going to win at Flormar.”
If one company gets away with firing workers in Turkey for joining a union, what’s to stop other big employers doing the same thing?
If people can't join  a union, they have no way to stand up for themselves  and demand wages that will feed their families, safe workplaces, time off when they’re sick and freedom from management bullying.
Yves Rocher’s makeup and skincare products target women. They even sponsor awards for women leaders around the world. Well, the many women who worked at this factory aren’t asking for an award -- they just want their jobs back, and a guarantee they can stand up for themselves by working together in a union.
Now SumOfUs, the large international campaigning group, has taken up the Yves Rocher case as a priority campaign. Thousands of supporters daily are signing the online SumOfUs petition calling for Yves Rocher to stop the union busting in Turkey.
Support the workers and join the campaign.