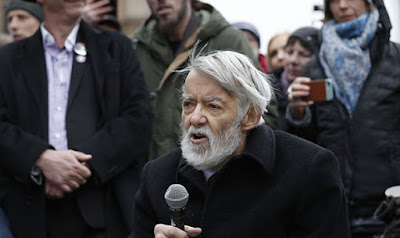 The long-standing Labour MP Paul Flynn has  died aged 84,his local association has announced The association said on Twitter: “It’s with great sadness that we let you know that our MP, Paul Flynn, has died today.the party has announced. “Paul is a hero to many of us in the Newport Labour family and we mourn for his family’s loss. We would ask that the privacy of Paul’s family is respected at this difficult time.”
Mr Flynn was born in Cardiff and educated at St Illtyd's College and University College, Cardiff, becoming a chemist in the steel industry until 1983. A fluent Welsh speaker, he was a member of the Newport Borough Council (1972–81) and Gwent County Council (1974–82). He was elected to the House of Commons for Newport West at the 1987 general election, and remained its MP ever since, being re-elected at the 2015 general election.
Paul Flynn joined the front bench under Neil Kinnock in 1988 when he became a spokesman on health and social security and for social security in 1989. He resigned from the front bench in 1990. He has been a member of the Transport Select Committee (1990-97), the Welsh Affairs Select Committee (1997-98), the Environmental Audit Select Committee (2003-05), and the Public Administration Select Committee since 2005. He had been Chairman of the Broadcasting Council for Wales, and member of the South Wales Docks Board and the Council of University College, Cardiff.
He had long  been considered an  outspoken maverick and fearless campaigner on a wide-range of issues,Mr Flynn's was not a career of high office but instead of long-fought causes including benefits, animal  welfare, devolution, and  was a long-standing opponent of nuclear power in the United Kingdom  and in particular the new  Hinckley Point C nuclear power station across the Bristol Channel from his constituency. He was on the left of the party, he was also a fierce critic of the so-called "war on terror"  and a consistent opponent of the Iraq war and Western military interventionism, one  of his interventions in recent years was to reeatedly read in parliament as an anti-war intervention the names of each new soldier who had falen in Afghanistan to focus MPs minds that their lies meant people died. He was  also a principled republican who in 1996 tabled a bill to abolish the monarchy via a referendum. The MP, who suffered from rheumatoid arthritis, was also noted as a strong and loud advocate of legalising cannabis and drug reform, once saying "Cannabis is the oldest medicine in the world. It has been trialled and tested by tens of millions of people over 5,000 years. If there were any problems with natural cannabis that would have been apparent a long time ago. " In  2017 he called for users to come to Parliament to break the law.
He also defended labour leader Jeremy Corbyn during the 2016 coup attempt and in spite of health issues, served in two shadow ministerial posts – Shadow Welsh Secretary and Shadow Leader of the House – to fill gaps left by those resigning to try to force Jeremy Corbyn’s resignation.
The Labour leader, said Flynn would be “greatly missed”. He tweeted: “I’m very sad at the passing of my good friend Paul Flynn. He had such love for Newport, knowledge of radical South Wales history and a dry wit..“He was an independent thinker who was a credit to the Labour Party. He will be greatly missed."
First Minister of Wales and Welsh Labour leader Mark Drakeford described Mr Flynn as a “giant of the Welsh Labour movement”.He added: “Today’s news will be a source of great sadness to all those who knew him.“He was one of the most effective communicators of his generation – inside the House of Commons and outside. But it was Paul’s willingness to speak up for causes beyond the political mainstream which marked him out as a politician of real courage and integrity.”
The Welsh secretary, Alun Cairns, tweeted: “Very sorry to hear of Paul Flynn’s passing. My thoughts & prayers are with his family. “He was an exceptional constituency MP & it was a privilege to work with him taking the Wales Bill through Parliament when he was Shadow SoS for Wales. We always had a warm & friendly relationship”.
Mr Flynn  announced in October that he intended to stand down as an MP due to health reasons, telling the Press Association he would “wait for a convenient time to go” and had “loved every minute” of his time in Westminster.He said at the time: “It’s been a great, wonderful, rich experience. I lasted 31 years.”
On all accounts  a kind principled man, who stood by his principles, who did not betray them like the new self indulgent Blair appreciation party, he was worth a million of them. He fought for the soul of the Labour Party against the Blairites as documented in his book 'Dragons led by Poodles '.He was  well respected across the political divide with his wonderful turn of phrase, witty comments and incisive mind, an example rarely seen  who will be missed. Whatever you think of his politics, his passing is sad news. He is survived by his wife Samantha and his two children.
Posted by teifidancer at 04:24