Justice 'Stansted 15' activists will not be jailed 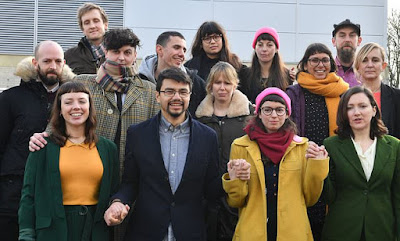 Great news today  on hearing that none of the Stansted 15 will not be jailed for standing up for human rights.
The activists, who blocked a March 2017 deportation flight at London's Stansted airport had cut a fence at the airport and laid on the tarmac, chaining themselves together and forming a ring around a Boeing 767 chartered by the Home Office that was about to violently deport 60 people on an immigration removal charter flight.
On their way to the airport, the activists say they took turns reading aloud the emotional testimonies of those who were due to be on board the plane, which had been collected and published by Detained Voices, https://detainedvoices.com/ an independent human rights group which speaks by phone to people being held in detention centers, pending their removal from the country.The activists said many of those detained fear persecution if they were returned. Their desperate pleas for help had spurred the group on.

on an immigration removal charter fligh

Read more at: https://inews.co.uk/opinion/comment/the-stansted-15-protesters-are-heros-the-government-should-be-hauled-before-the-court-instead/
on an immigration removal charter fligh

Read more at: https://inews.co.uk/opinion/comment/the-stansted-15-protesters-are-heros-the-government-should-be-hauled-before-the-court-instead/
on an immigration removal charter fligh

Read more at: https://inews.co.uk/opinion/comment/the-stansted-15-protesters-are-heros-the-government-should-be-hauled-before-the-court-instead/
Last December the group was found guilty of endangering the safety of the airport following a nine-week trial at Chelmsford Crown Court.https://teifidancer-teifidancer.blogspot.com/2018/12/solidarity-with-stansted-15.html
Human rights campaigners  claimed that the charges brought against them were excessive.In a statement released after their conviction, the defendants said  the real crime was the government’s “cowardly, inhumane and barely legal” deportation flights and that the Home Office’s “out of control system” must be held to account for the dangers it puts people in.
Defendants Melanie Strickland said the verdict was “profoundly disturbing” for democracy in Britain. “It’s the Home Office’s brutal, secretive and barely legal practice of mass deportation flights that is putting people in danger and their ‘hostile environment’ policy that is hurting vulnerable people from our communities,” she said.“It’s the Home Office that should have been in the dock, not us.”
A man set to be deported on the flight but since granted the right to remain in Britain said the Stansted 15 ” were trying to stop the real crime from being committed.
He said: “Without their actions I would have missed my daughter’s birth and faced the utter injustice of being deported from this country.
“For me a crime is doing something that is evil, shameful or just wrong and it’s clear that it is the actions of the Home Office tick all of these boxes.”
This morning, Judge Christopher Morgan at Chelmsford Crown Court declined to sentence the Stansted 15 to immediate jail time, the Guardian reports. (The maximum sentence for these airport endangerment charges is life in prison.) Instead, 12 people received community service sentences, according to End Deportations, a collective whose members include the Stansted 15. The three others received suspended prison sentences due to prior convictions from a Heathrow airport protest in 2015.

As the sentencing was awaited today at Chelmsford Crown Court, anti-deportation activists reported further mass deportation flights to Jamaica, including of descendants of the "Windrush" generation who have lived in the UK for decades. The "hostile environment" policy that encourages discrimination and the abuse of human rights  still continues.using ID checks by healthcare providers, landlords and employers to make life so difficult that undocumented immigrants will voluntarily leave, or face being removed by the state.

ad more at: https://inews.co.uk/opinion/comment/the-stansted-15-protesters-are-heros-the-government-should-be-hauled-before-the-court-instead/
The 15 defendants sat alongside each other in the dock and the direction from Judge Morgan was met with smiles and hugs from the defendants. Hundreds of supporters had spent the morning outside the courthouse with speeches given and banners unfurled cheering as they arrived at court and posed on the steps before entering  and again when the news of their non imprisonment was announced.
The Stansted 15 provided the following statement to End Deportations.

“These terror convictions and the ten-week trial that led to them are an injustice that has profound implications for our lives. The convictions will drastically limit our ability to work, travel and take part in everyday life. Yet, people seeking asylum in this country face worse than this: they are placed in destitution and their lives in limbo, by the Home Office’s vicious system every single day.
“When a country uses draconian terror legislation against people for peaceful protest, snatches others from their homes in dawn raids, incarcerates them without time limit and forces them onto planes in the middle of the night, due to take them to places where their lives might be at risk, something is very seriously wrong. Every single one of us should be very worried about our democracy and our future.”

If there was any real justice, the activists would probably be given some kind of award, they shouldnever have been charged in the bloody first place, they are heroes and deserve to be recognised for this and standing up against injustice. They have prompted a much needed change  in attitudes, with more people arguing against deportations and detention centers.It's so important that we continue to defend the right to protest, because it's protest that has delivered all of the rights that today we take for granted.