Thousands of schoolchildren and young people  walked out of classes on Friday, skipping class as part of a global youth action over climate change, co-ordinated by the UK Youth Climate Coalition.  to save the planet amid growing anger at the failure of politicians to tackle the escalating ecological crisis.
Organisers said more than 10,000 young people in at least 60 towns and cities from the Scottish Highlands to Cornwall joined the strike, defying threats of detention to voice their frustration at the older generation’s inaction on the environmental impact of climate change.
Organisers also estimated around 3,000 schoolchildren and young people gathered in London, with 2,000 in Oxford, 1,000 each in Exeter and Leeds and several hundred in Brighton, Bristol, Sheffield and Glasgow.
In London, the protesters held banners and chanted as police and onlookers watched. They blocked the roads outside parliament chanting “Turn off your engines” at passing cars, and “We want the chance for change now” before mounted police moved them away.
In Manchester, hundreds gathered outside the Central Library before marching to the Royal Northern College of Music with signs reading “Climate over capitalism” and chanting “Whose future? Our future.”
Greta Thunberg, the 16-year-old Swedish student who started the Friday strike movement in August last year by striking outside the parliament in Stockholm, said that her message to the students striking in the UK was the same as to students striking everywhere. “They should not let anyone tell them not to do this, because it is our future and our choice,” she said. “And we have to continue like this, every day, or every week, or every month, just to continue putting pressure on people in power.”
The strikes first spread to Australia. By December last year thousands of students had joined them, mostly in Europe and North America, including in Belgium, Switzerland, Austria, Japan, the US and Canada. Since the new year, they have spread even further to countries across Africa and South America, with strikes in Colombia, Uganda, Nigeria, Tanzania, Kenya and Mali. Now up to 70,000 school students are striking every week – in at least 270 different cities and towns, – under the tag #FridaysForFuture. The movement is being driven almost exclusively by teenage girls and young women, many of whom are rejecting the role of men who have been running the environmental movements in the past.
The young people taking part in Friday’s strike called on the government to declare a climate emergency, communicate the severity of the ecological crisis and change the curriculum to make the state of the environment an educational priority. The size of the Youth Strike 4 Climate is testament to the passion and awareness among young people that we need to fight for a future that simply doesn’t exist because we’ve been betrayed by the inaction of those in positions of power.
We should not forget that it is the capitalist system,  and the politicians who defend it  who are responsible for climate change and environmental degradation. We adults ought to realize that it is no longer for us to tell our kids what to do.We ought instead  take up the role of supporting them in their uprising, asking how we can help them in their struggle for survival. They are so inspiring us, at the moment. It is a result  our own inaction that  has led the world being in a state of crisis, that threatens our kids future, that they are currently making a stand. We have no right to judge them or to take the moral high ground. like Theresa May has been, after all they are showing us such a good example in their positivity and outlook who have the logic to recognise the current climate emergency. .
Sham 69 's terrace anthem above  still  relevant  after all these years, the Kids United will  never be divided and can still be a powerful force for change. 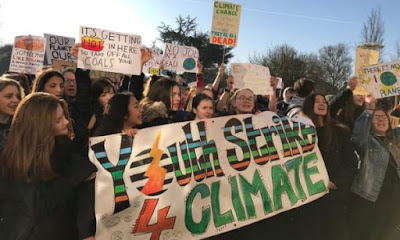 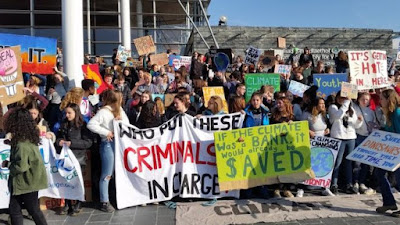 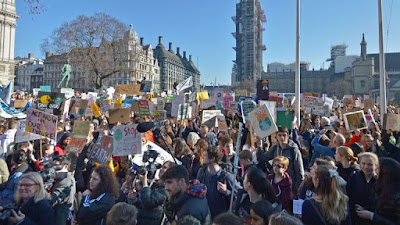 For once in my life I've got something to say,
I wanna say it now for now is today.
A love has been given so why not enjoy,
So let's all grab and let's all enjoy!

Just take a look around you,
What do you see?
Kids with feelings,
Like you and me.
Understand him, he'll understand you;
For you are him, and he is you.

Freedom is given,
Speak how you feel.
I have no freedom,
How do you feel?

They can lie to my face,
But not to my heart.
If we all stand together,
It will just be the start...