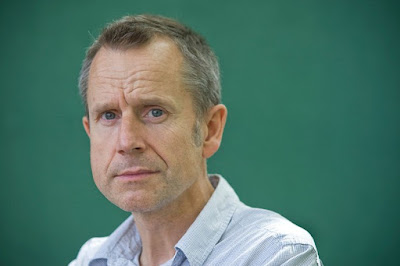 Sad to hear that Jeremy Hardy ,the  much-loved British comedian and activist, died far to young earlier today after a long battle with cancer aged 57. He is survived by his wife, filmmaker and photographer Katie Barlow, and his daughter Betty who were with him when he died.
"Friends and family of comedian Jeremy Hardy are immensely sad to announce that Jeremy died of cancer, early on Friday 1st February," said   his publicist Amanda Emery in a statement. "He was with his wife and his daughter as he died. He retained to the end the principles that guided his life; trying to make the world more humane, and to be wonderfully funny.He retained to the end the committed principles that guided his life; trying to make the world more humane, and to be wonderfully funny. He will be enormously missed by so many, who were inspired by him and who laughed with him. A fitting memorial will take place, details to be announced soon."
Born in Farborough, Hampshire, in 1961, he started his career as a stand-up comedian and won the coveted Perrier Award in 1988 and best live act at the ITV Comedy Awards in 1991.
His TV debut came in 1986 when he starred in Now - Something Else appearing alongside Rory Bremner. The impressionist posted that Hardy was "unfussy, unshowy, principled, self-deprecating," and "funnier than the lot of us put together"
He went on to play Corporal Perkins in an episode of Blackadder Goes Forth in 1989 Having studied history and politics at the University of Southampton, the life-long socialist wrote at length about social politics for publications including The Guardian and ES Magazine.
Hardy  built a reputation for weaving socialist politics into his comedy acts, balancing outrage at the state of the world and the United Kingdom with a compassion for ordinary people. Away from stand-up, Hardy was known for his social justice campaigning and guest appearances on BBC Two's Mock the Week and BBC Radio 4's The News Quiz and I'm Sorry I Haven't a Clue. He was also an author and actor.
Like many of his '80s contemporaries, Hardy was an overtly political comic who railed against the perceived injustices of the Conservative governments of Margaret Thatcher and John Major.
When he started off in comedy he said that he originally hadn't intended to be a "political" comic, but that the atmosphere of Margaret Thatcher's Britain made it inevitable.
"I'd always been a sort of leftist, liberal social democrat, but the country in the 80s was so right-wing that I thought I'd become part of some beleaguered minority of ultra-leftists," he told friend and fellow comedian Jack Dee on the BBC show Chain Reaction.
He was also fiercely opposed to the Iraq War begun by the labour government of Tony Blair.He was ubiquitous on demonstrations against war, austerity, racism and in support of striking workers.
One of his greatest political passions was Palestine. For most comedians, especially those who regularly appeared on BBC panel shows, the topic was too sensitive to broach. Of course, the main reason for this is that few take the effort to do their homework, let alone travel to the region to see the situation first hand.
In 2002, at the peak of the Second Intifada, which had then been raging for two years, Hardy took up an offer by his friend Leila Sansour - chief executive of the Open Bethlehem NGO, to be the subject of a film in which he travelled to the West Bank as part of the International Solidarity Movement to be a human shield.
The result was the very moving, and very funny documentary, Jeremy Hardy Vs The Israeli Army.
which saw the comedian facing down Israeli gunfire and eventually become trapped along with six other British activists in Bethlehem as the town was placed under siege by the Israelis.
Palestine activist Leila Sansour had wanted to bring a "recognised name" - someone famous - to the West Bank to see the occupation for themselves, and to bring the solidarity movement to a wider audience. The only person willing to do it was Jeremy Hardy.
"I could see she had a strange faith in the power of minor celebrity," says Hardy in the film's introduction.


He remained a committed activist in solidarity with Palestinians, raising money for Palestinian causes including the Palestine Trauma Centre and Medical Aid for Palestinians.
He campaigned against the Israeli military's use of checkpoints, forcing patients to transfer between ambulances on either side of often arbitrarily-placed barriers.
"People die because they don't reach the hospital in time," he told The New Arab. "People also miss appointments all the time because of getting held up at the checkpoints, for example for not having the right paperwork.
"It just highlights the brutality of the occupation in the way it just makes ordinary everyday life, things that we take for granted, impossible."
In one of his last visits to the West Bank, a trip organised by Medical Aid for Palestinians (MAP) along with fellow British comedian Imran Yusuf, he highlighted the ongoing plight of the people of occupied Hebron and the attempts by Israeli settlers to gain full control of the centre of the city.
“They want them to leave," he tells the camera. "They want Palestinians to leave. They want the businesses to close, they want people to stop coming here to shop. They want the economy to collapse. And then take all of it, take all of the land, basically."


There’s been no crop failure here, there’s been no natural disaster - people have just been crushed by being occupied.”
With a few exceptions - such as his close friend Mark Steel - there will be no mainstream voices left in the ever-shrinking pool of "actually well-informed satire" after Hardy's passing, let alone those who can speak and ridicule with authority about Syria or Palestine or war and capitalism.
Tributes this morning were led by Labour Party leader Jeremy Corbyn. Who said on twitter
" Jeremy Hardy was a dear, lifelong friend. He always gave his all for everyone else and the campaigns for social justice."
Fellow comedians and activists also took to Twitter to remember their friend.
Jack Dee, who worked with Hardy on Channel 4 sketch show Jack and Jeremy's Real Lives and I'm Sorry I Haven't A Clue, tweeted that Hardy was "ground-breakingly brilliant, off the register funny, compassionate and caring".
Fellow comedian David Baddiel called his death simply "a great loss to comedy".
Deputy Labour leader John McDonnell praised Hardy for "courageously supporting campaigns for social justice".
Journalist Owen Jones added: "Utterly devastated to hear of Jeremy Hardy's death. He was such a wonderful guy, hilarious, full of humanity and heart, committed to fighting for a world without injustice. Just a lovely bloke."
Until 2001, Hardy wrote a column for the Guardian newspaper in which he regularly expressed his support for the Socialist Alliance .His radical views did not always go down well, however, and he was once booed by members of the audience on Radio Four's Just A Minute for ranting about the Royal Family when asked to talk about "parasites".
In 2004, Burnley Council cancelled one of his shows after he said members and supporters of the British National Party should "be shot" on an episode of his Speaks to the Nation programme.
Hardy’s political history and identity is neatly captured by two recent tweets. The comedian’s own last message on his official account – sent at 2.40am on 8 January – attacked Tony Blair’s latest intervention in the Brexit debate, warning that the former premier risked precipitating hard Brexit and a right-wing Tory government.
Hardy was twice married, to American actress and comedian Kit Hollerbach, who appeared alongside him in radio sitcoms and with whom he adopted a daughter, Elizabeth, in 1990. A memorial to Mr Hardy is set to be announced.
Sadly  he never lived to see the end of the occupation of Palestine or the kind of people he thought should run the country actually taking power in Britain. Though his death was untimely, Jeremy remained philisophical on matters of mortality and the apparent pointlessness of life:
"Why don’t they just accept that life is sad and cheer up? After all, it’s not forever."
Rest in Power to such a good man  and one of the few genuinely funny and radical comedians who chose to use his comedy to change the world, rather than to fill stadiums.